“This Land Is Your Land ” is a song almost all of us know. School children learn it.  But do you know who wrote it?  If you’ve forgotten, it was Woody Guthrie,  a man who helped revive and popularize folk music in America.

Woody Sez- the life & music of Woody Guthrie — now at TheaterWorks in Hartford intersperses his life story, mostly told by David M. Lutkin as Woody, with renditions of the music he made so famous.

Guthrie lived a hard-scrabble life.  He was born in Oklahoma but lived in both Texas and California as well as New York City.  While he had brief periods of affluence, for the most part his life was the same as the farmers, oil rig workers and dust bowl refugees. He hopped rails, went to bed hungry, did whatever manual labor was available..

Yet while doing that Guthrie was a wandering minstrel who helped preserve classic folk songs as well as creating new ones that touched on social protest and political observation.  A staunch member of the political left — and a good friend to many who were blacklisted in the ’40s and ’50s, Guthrie also wrote a newspaper column, “Woody Sez” — hence the title of the show — that commented on political and social issues in a rural dialect.

He wrote of the dust bowl, the Okies and Arkies who went to California to try to survive, to the union members who fought the bosses and even the merchant marines who helped win World War II. He was one of them.

Along the way he collected folk songs and wrote hundreds of others.  Alan Lomax, the great folklorist recorded him for the Library Congress series. 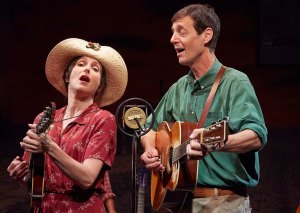 When he came to New York he “hung out” with Pete Seeger, Leadbelly, Burl Ives and other great singer/writers.  He was a founding member of the Alamanacs, a folk group that helped lead to the Weavers and the folk revival.

Woody Sez started life at the Edinburgh Festival Fringe in 2007 and has since been performed in both the US and England where it was nominated for a “best musical” award.

David M. Lutken, who plays Woody, not only devised the show (with Nick Corley and Darcie Deaville, Helen J. Russell and Andy Teirstein) but also serves as the music director. Lutken has the lean look that we associate with Guthrie and a casual friendly manner that brings the audience into the story of Woody’s life.

His life had many tragic elements.  His mother, who ended her life in a mental institution, is thought to have set several fires, one of which killed his older sister. She is believed to have suffered from the genetic neurological Huntington’s Disease. His father had both economic ups and downs and ended up leaving his children in Oklahoma while he went to work in Texas. Some people suspect the father also suffered from the disease, for which there is no cure. Woody himself developed Huntington’s Disease and died in 1967 after having spent years in a variety of mental institutions. The disease causes both physical ailments and mental disorders.

The show opens with “This Train Is Bound for Glory” and ends with “This Land Is Your Land’: but in between are over 20 other Guthrie songs from “Why Do You Stand There in the Rain”, “So Long It’s Been Good to Know Yuh,” “Union Maid,” and “Do Re Mi” and lesser known works (to me) such as “Pastures of Plenty,” “Oklahoma Hills,’ “Dust Storm Disaster” and more.

Lutken is joined by three talented musicians/actors who not only play a variety of roles — Will Geer, Guthrie’s mother and his sister, Pete Seeger and his radio partner Lefty Lou — but play multiple folk instruments including mandolin, banjo, violin and others.

David Finch, Leenya Rideout and Helen J. Russell all bring charm and musicality to the show. All have performed the show before, with Russell a member of the original cast.

The set by Luke Hegel-Cantarella is flexible and simple — some large photos of Woody, instruments placed around the stage, and a barnlike feel.

This is a well performed and fascinating remembrance of an important man in American musical history.  It would be an excellent show for teens and young adults who would find the stories of America in the ’20s and ’30s more compelling than any history book.