Hugh Jackman on Broadway is worth celebrating.  His busy movie schedule limits both his appearances and the length of his stays, but up-to-now  each has been well worth seeing. From his performance as Peter Allen in The Boy From Oz to his performance with Daniel Craig in A Steady Rain both show consummate acting in interesting pieces.  His one-man show was worth every penny you paid to get a ticket.

Now he has returned for another limited engagement in a new play (for the US) by Jez Butterworth who is apparently the “hot” playwright in London.  Two years ago his play Jerusalem brought another Tony award to Mark Rylance.

After seeing this short (80 minute or so) play, I wish Jackman had chosen something else.

The problem is not with the performances but with the work.  It feels unfinished.  Is it sinister? Symbolic? Or is the Emperor very scantily dressed?

Jackman plays “the man” — I am getting really tired of playwrights using this gimmick — who takes his latest romantic squeeze to a remote cottage and rhapsodizes about fishing for a certain type of sea trout that only is present at very limited times.  “The woman” is less than enthralled about fishing. She would prefer to read. But the man goes on and on about the wonder of it all, so she apparently goes along. 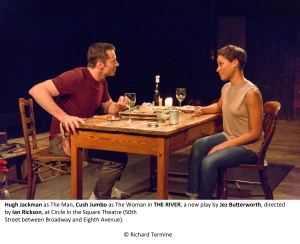 Next we see him frantically calling for help — the girl wandered off from where they were fishing and has not returned.  As he is on the phone, she does return — except, it is not the same girl — it is “the other girl”.  Who is she?  A previous love? An apparition? Are we dealing with a time warp?  The conversation is somewhat similar, but this time she has caught a fish.  Apparently with the help of a man she met along the banks and without the man’s favored lure. It also seems that she slept with this stranger.

They part, and as she leaves she says, “If you lose me you will search for me.

For ever.In the bedroom. Under the bed, in the box there’s a framed drawing. A drawing of a woman. She’s sitting here in that chair. She’s wearing a scarlet dress. Her face has been scratched out.”

Sure enough, right after she exits, “the woman” enters again and, guess what?  She has found under the bed a portrait of a woman in a scarlet dress sitting in the chair with her face scratched out.  And there’s a scarlet dress in the closet!

By the end of the play, you will most likely be thoroughly confused.  Was the “other woman” his true love who died or left him?  Has he been searching for her replacement?  Did he kill her?

The tone is dark enough that any of these are possible.

It appears that Butterworth is talking about the difficulty men and women have in communicating, the reticence of many men to feel or talk about love directly, the difficulty of relationships.

But it all seems so pretentious. Even down to the  Pinteresque pauses in the script.

So if the play isn’t great, what about the performances?  Those are fine.  Jackman seems weary and lonely as “the man.”  He looks little tired and gaunt as perhaps he has been playing this game too long or that loneliness is overtaking him.  Yet there are some truly sensuous moments — one of which is when he skillfully filets a fish on stage.

Jackman’s performance is restrained — though he talks a great deal — and contained.  You keep trying to figure this man out; it  seems clear he is using all his talk about fishing and poetry to cover up something.  For those who prefer the ingratiating Jackman of his musical performances, this one is confusing and maybe, to some, will be disappointing.  There are no great smiles or flashing eyes or easy charm.  This is a man that is in some sort of pain. Unfortunately the playwright never helps us understand what has caused the pain.

The two women, Laura Donnelly as “the other woman” and Cush  Jumbo as “the woman.” are excellent.  At first, they looked enough alike that when “the woman” was replaced by “the other woman” I wasn’t sure it was two separate characters. Yet each develops a unique personality.

The set by Ultz show us a masculine rustic fishing cabin. The lighting by Charles Balfour; sound by Ian Dickinson for Autograph; music by Stephen Warbeck all add to the ambiance.

Director Ian Rickson has worked with Butterworth before and we can assume that he has a clear understanding of what the playwright intended, even if the script does not reveal it.  He makes effective use of the somewhat awkward Circle in the Square stage.

The River is at Circle in the Square on West 52nd Street through February 5. For tickets, contact telecharge.com