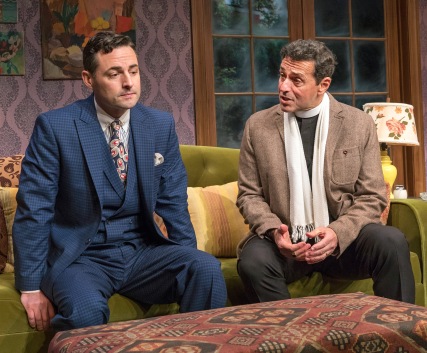 An unproduced play from the 1930s. Why would someone produce it now? Is it worth producing?

I am very glad that off-Broadway’s Mint Theater, which specializes in lesser known works of the early part of the 20th century decided that Yours Unfaithfully by Miles Malleson was worth producing. They have done a terrific job with this play that falls in the “drawing-room comedy” genre.

It’s easy to understand why the play was not produced at the time. In England, the Lord Chamberlain who “licensed” productions would never have approved of the subject matter: open marriage. Audiences would have been shocked by this play that masquerades as a typical drawing room comedy.

The play opens in the country drawing room of Stephen and Anne Meredith.  They have been married, happily, for some time; he is a writer and she runs a private school they established. But Stephen is suffering from writer’s block and Anne thinks she has the perfect remedy: an affair with their friend Diana Streatfield, who was widowed a year ago and has just returned from a long trip abroad.

You see, Stephen and Anne hold “progressive” ideas about marriage and fidelity. They do not believe that the occasional affair (either a few trysts or something longer) is bad for their relationship.  Now you see why the Lord Chamberlain would have been apoplectic

Before Diana arrives, Anne suggests that Stephen has had an attraction for Diana. Once she arrives, Anne conveniently leaves them alone. Also arriving soon after is the local doctor and friend, Dr. Alan Kirby. Later, Stephen’s father, an Anglican minister arrives – he represents the voice of accepted morality.

As the play progress, what Anne suggested comes to pass; hut she finds herself feeling emotions she did not expect. She may have encouraged both her husband and Diana, she still can’t feel a mixture of jealousy and hurt.

Complications, of course, abound. Anne, as she tells Diana, has taken advantage of their philosophy and Stephen has reacted with perfect equanimity. She faults herself for not been able to follow suit. So she suggests, that the couple got to Paris for a weekend.

Act three takes place in the room (bed/sitter) that Stephen and Anne have maintained in London. Stephen and Diana are in Paris, and Anne has come up to town to allow Stephen to return home without having immediately to see her.

The ending won’t be a surprise; it is relatively predictable.

What makes this production so good is the cast. Max von Essen, who was nominated for a Tony for his role in An American in Paris, plays Stephen with the perfect attitude. He’s irritated by his father’s views, he’s debonair without seemingly overly sophisticated, and he believes totally in their philosophy. So much so that he is surprised by his reaction to the trip to Paris.

As Anne, Elizabeth Gray, shows her confusion as her intellectual commitment to their agreement begins to conflict with her emotional ease. Mikaela Izquierdo gives us a Diana with sophistication, while Todd Cerveris is the loyal friend Dr. Kirby. Stephen Schnetzer plays the father with the bluster and the assurity you might expect of a minister.

The show is blessed with an outstanding set by Carolyn Mraz and appropriate and elegant costumes by Hunter Kaczorowski.

The direction by Jonathan Bank is absolutely spot on.

You probably have not heard of Malleson, as his work did not cross the Atlantic often. He was a playwright who was best known for his screenwriting (The Thief of Bagdad). He was also a skilled character actor who appeared in numerous British films and on stage, including playing Polonius to John Gielgud’s 1944 production of Hamlet.

It may not reach the brittle sophistication and dialogue of Nöel Coward, Yours Unfaithfully gives us more realistic characters. This is a play worth seeing.

It is at the Mint Theater at the Beckett Theater, 330 W. 42nd St. For tickets visit Telecharge.