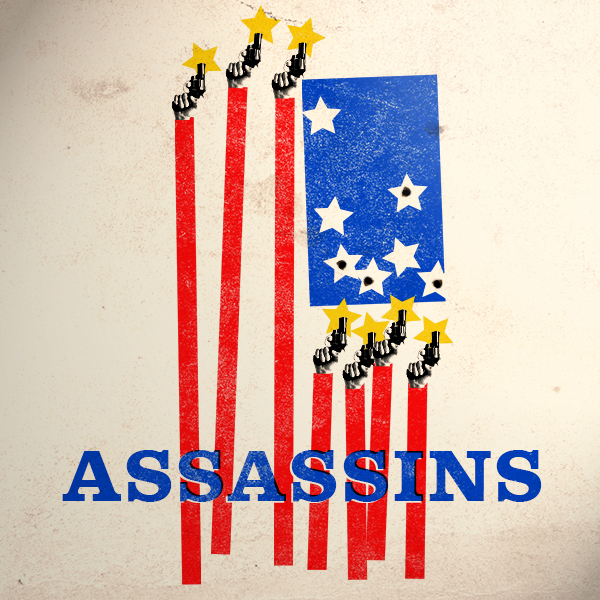 Assassins, the Stephen Sondheim & John Weidman musical that opens at the Yale Rep on Friday, March 17, may not be familiar to the casual theater goer. But for director James Bundy, it is a show that he has wanted to direct for many years.

One reason, Bundy said, is that he felt it would resonate with the audience.

Assassins is staged as a revue; the characters are the men and women who made successful and unsuccessful attempts on the lives of US Presidents.

“I was particularly drawn to it when we were planning this season because of the tenor of national politics, which are driven in part by the kind of anger and resentment, as well as the pursuit of fame and celebrity, that is so prevalent in our contemporary political culture,” Bundy explained. He added that when he scheduled the piece last spring, he had no idea who would be the Presidential nominees or who would be the winner of the election, but he felt the idea of the show would still be relevant.

The show itself was written in the late 1980s and was based on an idea by Charles Gilbert, Jr., an aspiring writer of musicals. Sondheim has said he read Gilbert’s script of a show about presidential assassin as a panelist for the Musical Theater Lab. Later, he asked and gained permission to use the basic idea though in a very different form. The original script had a typical plot about a fictional character.

The musical that Sondheim and Weidman developed is more of a revue, set in a carnival arcade shooting gallery where the different assassins interact despite wide variations in their historical time period. They added three non-historical characters: the Proprietor who owns the shooting gallery and provides the guns; the Balladeer who serves as the narrator; and Billy, Sara Jane Moore’s son, the son was real but the name was changed.

The show brings together the well-known assassins – Lee Harvey Oswald and John Wilkes Booth – with those that have been lost to history such as Charles Guiteau (President Garfield’s assassin) as well as some who made attempts on the lives of Presidents, and in one case, a President-elect.

In explaining his reasons for doing the show, Bundy said, “our job as artists is to notice what is going on around us.”

He describes Assassins as a “classic” and said that as such “it connects vividly to the preoccupations of any period. Although there are ways in which the specifics of the show are fixed in time, and the history is unknown to some of us, the fixations of the characters are utterly current.”

Bundy said the Yale production includes a 13-piece orchestra playing the original Broadway orchestrations. But he also said the production which is about the American Dream invites “a theatrical interpretation that combines our national iconography with originality and contemporary perspective.” These include digital design with contemporary and folk art.

Whether it be Oswald, Booth or Byck (attempted assassin of Richard Nixon), what the show points to, Bundy said, is that “political violence has been part of American culture for more than 150 years – as have the strains of entitlement, misguided rage, and gun culture that fueled the phenomenon.”

The press release on the show points out, Assassins is about nine people who, “united in disillusionment and alienation, take what they believe is their best – and only – shot at the American Dream.”

Bundy agrees with Sondheim, who has often stated that he viewed Assassins as his most “perfect” musical.  In an interview with the Globe (London) in 2014, Sondheim said “John Weidman [the librettist] and I knew what we wanted to do, and we did it.” He added it that it fulfilled his expectations.

Explaining what he finds so intriguing and perfect about the show, Bundy said, “The creators were able to write in different genres and create a prismatic view of our nation’s history and character. In less than two hours, they raise gripping questions about who we are and what we tried to do.”

They were, he said, able to create a range of audience reactions from laughter to horror to sadness.

He also liked that Sondheim and Weidman took risks in combining the surreal and the documentary, the comic and the tragic.

The music embraces all American musical genre that reflect the periods of the assassins. Thus the shows as songs that sound like folk and revivalist numbers as well as those that reflect the ’60, ‘70s and ’80.

Initially, while many critics liked the show and admired Sondheim and Weidman’s brilliance, a number were put off by the subject matter and unsure whether the authors were condemning or glorifying the assassins. Some missed the obvious satire in the piece.

In the Globe interview in 2014, Sondheim said, ““Nobody at the end of the show should feel that we have been excusing or sentimentalizing these people. We’re examining the system that causes these horrors. The US Constitution guarantees the pursuit of happiness. It doesn’t guarantee the happiness. That’s the difference. These are people who feel they’ve been cheated of their happiness, each one in a different way.”

The Yale production which runs through Saturday, April 8 has assembled a cast that includes Broadway veterans Stanley Bahorek as Guiseppe Zangaria who appeared in a number of Broadway musicals, Stephen DaRosa as Charles Guiteau who received a Connecticut Critics Circle award for his performance in These Paper Bullets!,  Austin Durant as the Proprietor and P.J. Griffith as Leon Czolgosz. Robert Lenzi who was in Tuck Everlasting and South Pacific on Broadway plays John Wilkes Booth.

Assisting in the production are Andrea Grody as music director. She is fresh from the off-Broadway debut of the musical The Band’s Visit which received rave notices. David Dorfman is doing the musical staging.

The production team includes Riccardo Hernandez who has created the sets, Ilona Somogyi the costumes, Yi Zhao the lighting.  Nathan A. Roberts and Charles Coes are the sound designers and Michael Commendatore is the projection designer.

This content is courtesy of Shore Publishing and zip06.