Movies into Broadway musicals. The trend continues with Groundhog Day starring Andy Karl. The musical will not make you forget about the film, but it does provide a diverting evening in the theater featuring a terrific performance by Andy Karl and some clever “sleight of hand” illusions.

You won’t leave the theater humming the tunes or anxious to see it all again, but you will have enjoyed it.

The musical keeps the basic plot of the 1993 movie which starred Bill Murray as the TV weather forecaster Phil Connors who gets caught in an interesting time-warp. He works for a Pittsburgh TV station and is sent to cover the Groundhog Day activities in Punxsutawney, home of one of the most famous of the groundhogs.  He’s done it all before.  Add to the fact that Phil has a healthy ego who enjoys the celebrity status he has achieved although it has gone to his head a bit; he is not the nicest of guys.

In the film, he arrives in Punxsutawney with his producer, Rita and a cameraman, Chris. On Groundhog Day he wakes up and does a half-hearted and somewhat snide on-camera presentation and then wants to immediately leave. Rita wants to stay but soon a blizzard (which Phil had predicted would not hit the area) has closed all the roads. The next morning, Phil awakens to find it is Groundhog Day again and that cycle is repeated many times with Phil becoming upset, depressed and angry. Finally the cycle is broken when Phil becomes a nicer, friendlier man.

The musical retains the central idea but has made significant changes. The producer Rita is no longer an experienced producer whom Phil has worked with before and for whom he may have feelings. Now she is a total surprise to Phil; she’s young and this is her first time producing a segment. While Phil does eventually develop feelings for her, at first he finds her enthusiasm annoying. The musical is also stuffed with a variety of “colorful” local characters.

The problem is that much of the show is repetition of the events of Groundhog Day. So we see the sheriff misplacing his gun, the “cute” teenage couple giggling and excited to see Phil over and over again. The time warp seems to go on 10 or more times. How many times is it funny or interesting to see the mundane lines repeated?

So despite the endless loop of repetition, the show offers some good performances and some respectable, if not highly creative, songs by Tim Minchin who did the same for Matilda. Let’s just say that the music/lyrics are serviceable with only one song “Nobody Cares” that I’m interested in hearing again.

What will keep you wondering is how Phil can be in so many places almost simultaneously. I won’t spoil the illusion, but you see Phil singing one song and a moment later he is waking in bed to start the day over again. In film, that would easy to accomplish; on the stage it will have you oohing and aahing.

Andy Karl carries the show; he manages to make even the irascible Phil somehow sympathetic and likeable. Right now he is doing that with a brace on his left leg; theater fans know that he hurt his knee right before the opening night. After missing a few performances, he returned with the brace which has to be awkward, heavy and tiring. It’s not clear if any choreography was changed to accommodate his injury, but he certainly moves around the stage a great deal.

As Rita, Barrett Doss does a good job as the overly gung-ho producer who doesn’t really know how to handle Phil. John Sanders manages to find a variety of emotions for Ned Ryerson the old friend and insurance agent that Phil meets on each reiteration of the day.

While the movie was almost a dark comedy, here that element has been lost. Despite Phil’s increasing depression and agitation at the repetitions of the day, it all remains too perky and happy.  In the middle of the second act, there is the “big” dance featuring the entire company that simply seems both out of place and a delaying tactic to get to the final curtain.

All the production elements are very good including the scenic design by Bob Howell (he also did the costumes) that includes a wild car ride among its effects. Matthew Warchus as directed it efficiently.

See Groundhog Day for Andy Karl’s performance. He has the potential to be a long-term presence on Broadway and a major star.

It is at the August Wilson Theatre, 245 W. 52nd St. Tickets are available through Ticketmaster. 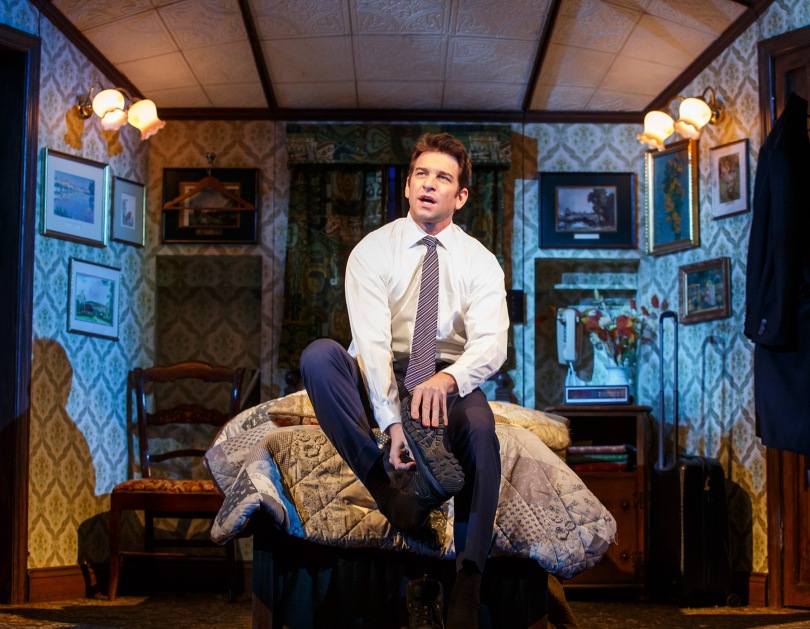