Ragtime is a big show, full of music and requiring a large cast. It takes vision to see how to effectively do a show this size on a summer theater budget with a smaller stage. Director Joe Calarco and the Barrington Stage Company have succeed beyond all expectations.

He and his talented company have created an emotionally moving production of this sprawling story.

Based on the E. L. Doctorow novel (which later was an excellent film), Ragtime interweaves three stories showing different aspects of a changing America at the turn of the 20th century.

We have the story of a upper middle class, white family living in New Rochelle: Father, Mother, Son, as well as Mother’s father (a retired professor) and her brother (who is seeking something to give meaning to his life.) Father is a businessman who owns a factory that makes firecrackers and other patriotic paraphernalia.  Mother runs the house and defers to Father. But times are a changing and when Father goes off for a year’s journey to the North Pole with Admiral Perry, Mother begins to not only gain independence but decides she likes it.

Then there are the African Americans who are more and more moving out of the South. They are exemplified by Booker T. Washington, but also by Coalhouse Walker, a young ragtime pianist in Harlem who wants respect and freedom. It is his story that spurs much of the plot. He falls in love with Sarah, a servant in New Rochelle, they have a child and it is of his revenge when his Model T is vandalized there that propels the story.

The third strand is the mass of immigrants from Eastern Europe (many Jewish) flooding into the factories and tenements of the city. Here it is Tateh who has arrived from Latvia with his young daughter. He wants a better and safer life but soon finds that the sweatshops and housing are worse than what he left behind.

Doctorow in his novel and Terrence McNally who wrote the book for this musical interwove into the story historic figures from Henry Ford, J. P. Morgan and Booker T. Washington, to political activist Emma Goldman and celebrities Harry Houdini and Evelyn Nesbit.

Calcara and his production team have cleverly used just one set – an attic – that suggest the many scenes in the show – from Harlem, to the tenements, to Union Square, J.M. Morgan’s library and more. The show opens with Mother, Father and the rest of the family climbing up into the attic in modern dress and transforming themselves into the period clothing. A small, replica of the house stands on a pedestal. He uses chairs to create cars, podiums for various speeches and a rocking horse for Nesbitt’s velvet swing.

Abraham has a wonderful baritone voice and projects Coalhouse’s dignity and determination as well as his love for Sarah. Villanueva’s Sarah begins as a shy young woman but she grows in strength and uses her supple soprano to break our hearts.

Elizabeth Stanley’s Mother goes from compliant wife to determined woman who stands up to her husband. She does an excellent job with some of the most delightful music of the show – “Goodbye, My Love” and “Back to Before.”

Praise must also be given to J. Anthony Crane as the immigrant Tateh and David Harris as Father who does not understand or approve of the many changes occurring. The actors who play historic characters are good but don’t quite live up to the performances of the others. Lawrence E. Street is overly stiff as Booker T. Washington, Anne L. Nathan’s Emma Goldman needs more stridency and more of an accent and Leanne A. Smith seems overly girlish as Evelyn Nesbit.

But despite these minor complaints, this production is well worth seeing.

Calcara has assembled a versatile cast of 22; most of the ensemble double as one of the minor characters in the play and the ten piece orchestra does full justice to the music by Stephen Flaherty. Lynn Ahrens wrote the music; this team (including McNally) are responsible for the current Broadway show Anastasia.  He is aided by the period choreography of Shea Sullivan

In addition, Sara Jean Tosetti has created costumes suggestive of the period. Particular praise should be given to lighting designer Chris Lee and the scenic designer Brian Pather.

At times, words were muddled or too soft both in spoken dialogue and songs; but it did not detract from the overall effectiveness of the production.

Ragtime, which deals with an America that was changing drastically – with all the stresses that such a change engenders – is worthwhile seeing as America appears to be going through another major change in our society. 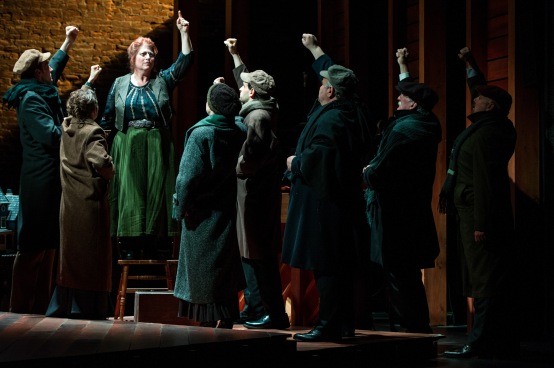