Philosophers and theologians for centuries have written, discussed and argued, what should someone do in periods of repression, danger, war? Do you do what is necessary to survive? Do you take a stand no matter how dangerous to yourself and your family? What if the stand would purely be symbolic, that nothing you did could change what is going on?

During the 20th century, this discussion came to the fore with the rise of Hitler and the repressive Communist regimes. (It is interesting that in the western world, we often ignore similar situations in other parts of the world.)

This is at the heart of the fascinating world premiere, Seder, now at Hartford Stage through Sunday, Nov. 12. The play by Sarah Gancher has been developed at Hartford over the past few years.

It is 2002 in Budapest; Hungary has been free of Communist rule since 1989, but it is the year of an extremely divisive election between center right and center left parties. One of the issues that had recurred since the end of Communism is the role of former party members in society and government.

Gancher has illustrated this conflict over Hungary’s past and future by setting it within one family.  Erszike, the mother, has lived through the entire Communist era. Though born a Jew, she now views herself as non-religious. She had been a loyal Communist accepting the ideology, but she had had to make difficult decisions throughout her life.

We are in her apartment where her daughter, Margit has planned a traditional Jewish Seder – or as traditional as possible. Attending will be Margit’s brother, Laci, whose job is borderline criminal and David, an American Jew who seems to have only limited success at numerous professions – law, counseling, teacher and writer. Margit is obviously attracted to David. The older sister, Judit is also expected, though no-one is sure she will arrive. She and Erizike have not spoken nor seen each other since the downfall of the Party.

The play focuses on Erszike’s story which is told in flashbacks as the evening goes on. The memories are triggered because Margit had asked David to take her mother out for the afternoon while preparations were underway. Unknowingly, he had taken her to the museum that was established at the former headquarters of both the Nazi secret police and also the Communist police. Erszike has been a secretary there. In the basement of the building is a “Wall of Murderers” – photos of people who worked there and are accused of being complicit in the spying and torture that occurred. Her photo is prominently displayed.

Margit is upset that David had taken her there, because she knows that Judit is the curator of the museum. Judit has aligned herself with the more right wing political party.

The Seder beings without Judit who arrives late and barely speaks to her mother.

During the course of the evening, at various times, Erszike steps away to recall a vivid memory: The first meeting with Attila, a member of the secret police, who notices her as a janitor, other episodes in their relationship, the 1956 uprising and more.

We learn so much of her life. She was a girl alone; her parents had died in the war, her aunt and uncle had been considered “bourgeois” by the Communist regime. She believes in the party and its ideals.  She accepts the job of secretary which involves typing up transcripts of wiretaps and interrogations. Attila demands much of her and reminds her of how much she owes him when he demurs. He even arranges her marriage to another worker in the building, Tamás, when she becomes pregnant.

None of the family know any of this. Yet the animosity between Judit and Erzike eventually force most of this out. Judit resented her mother long before now in part because she blamed her mother for Tamás’ alcoholism and eventual desertion of the family.

During the course of the evening, as the Seder hesitantly continues revelations about the past occur. Judit finds that much of her sense of self is challenged by what she learns.

Director Elizabeth Williamson has assembled a fine cast. The play focuses most on the mother and her two daughters. Mia Dillon once again gives a superb performance, moving easily from the older woman to the young girl. You believe her in both roles. Last year, Dillon won the Connecticut Critics Circle award for supporting actress for playing dual roles (one a child) in Hartford Stage’s production of Cloud Nine.

She gives us a woman who has made choices, many that she felt were no choice at all, and has seemingly seldom looked back or examined those choices. She believes she did the things she did were for the good of her family and her children.

She also believes she did what she could to help people and in fact was warned that her bosses were aware of her losing files and changing words in the transcripts. But she also claims to not know what was going on in the basement of the building.

Birgit Huppach plays the strident and determined Judit. She is just as righteous and ambitious as any of the Communists were. She is running for office and makes a play for David because she thinks he can help her. It is an unsympathetic role and Huppach does not try to soften this woman who seems to have a very hard heart.

Margit as played by Julia Sirna-Frest is the opposite. She is a soft woman, who tries hard to please and is so obviously interested in David. It is she who wants to explore her Jewish heritage, perhaps to please David, but also she wants a family.

The male characters are more incidental to the story, but each contributes something valuable.

Steven Rattazzi is David, who is obviously the comic relief in the play. To emphasize that he is attempting to speak Hungarian, he gives unusual and funny pronunciation to the vowels in some of the dialogue. Just enough to make the point but sometimes it also generates laughs. He is a confusing character; it seems he has failed at many things, yet he also is very confident. Rattazzi manages to balance the humor and the ego of the man.

As Laci, the brother, Dustin Ingram is the disillusioned and angry one in the family. He is ready to explode at how things have gone in the recent years. Ingram gives us his anger and the possibility of violence. The father, Tamás, played by Liam Craig has the least important role in the play. He is the “passive” man who does what he is told and slowly sinks into depression. Finally Jeremy Webb plays Attila as the menacing, controlling officer who is always looking out for himself.

Nick Vaughan’s set extends the playing space as much as possible which leaves room for the flashback scenes. It shows three areas of the apartment – the kitchen, dining room and the living room. The backdrop is the wall of murderers which as the play ends becomes multi-layered. Marcus Dilliard’s lighting helps the audience recognize the flashbacks, and Jane Shaw’s sound design sets us in the appropriate time period for the flashbacks.

As you leave the theater, you will be thinking about both Erszike and Judit. But don’t be surprised if you don’t consider what you would have done in similar circumstances. How many of us have the courage to risk all when there seems no possibility of winning?

This content is courtesy of Shore Publishing Weeklies and zip06. 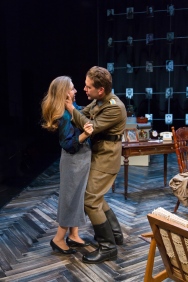