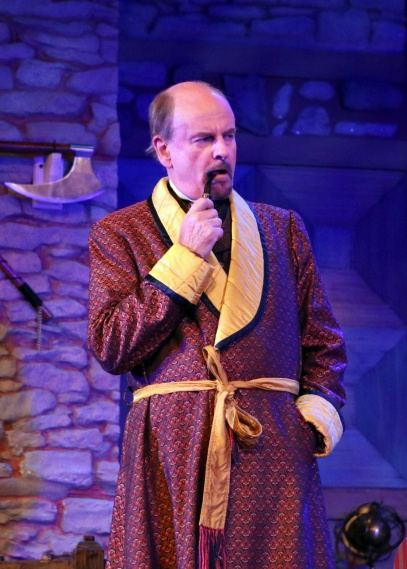 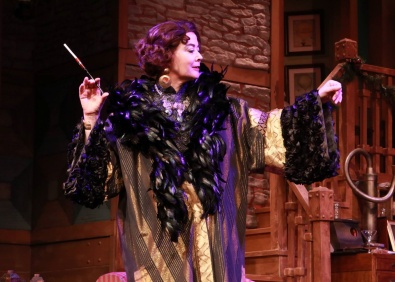 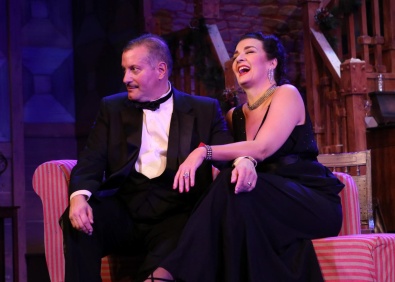 Watching actors have a terrific time is a delight for an audience. The cast of The Game’s Afoot now at Ivoryton Playhouse through Sunday, Nov. 19 seems to be having a marvelous time.

You will too, just watching them. Ken Ludwig’s play – billed as a comic thriller – takes us back to those Agatha Christie plays (and movies) that don’t always make a lot of sense but keep you involved right up to the end.

This play is set at Gillette’s Castle, that large residence overlooking the Connecticut River in Hadlyme that is now a state tourist attraction. It was built by the well-known actor William Gillette who adapted Sherlock Holmes stories into plays and then toured throughout the county for years playing the great detective. The success of the role helped fund his eccentric home; he hoped the state would care for the property, when he died in 1937.

By the way, Gillette was a distinguished actor, playwright who had his own stage company, knew Sir Arthur Conan Doyle and also held several patents. It was he who popularized the deerstalker hat which is part any Sherlock Holmes costume.

The play is set in his home on Christmas Eve in the mid-twenties. He lives there with his mother and has invited cast members to spend the holiday with them: the ingénue Aggie and the juvenile, Simon; the older acting couple Madge and Felix; and a gossip columnist, Daria.

The play opens at the end of Gillette’s play; at the curtain call of the play, someone fires a shot which wounds Gillette in the arm. The police have not found the shooter.

So we have a classic set-up. A dark and snow night, an isolated location and a group of people who may have unknown motives.

The ante for the tension is upped when the group learns (Gillette had already heard) that the stage doorman had been killed that morning. What is going on?

Playwright Ken Ludwig prefers to gently spoof this genre of murder mystery rather than play it for chills. Let’s just say that after one of the guests is murdered, there are some funny antics about hiding the body. One of the unique features of the castle comes into play.

But mixed into the fun is romance – Simon and Aggie have secretly married though Gillette had fallen in love with her, there’s marital discord between Madge and Felix, plus a séance led by Daria. She is, of course, the nasty, ambitious gossip columnist who has the dirt on everyone and is willing to use it to get what she wants. During the course of the evening, she wants Felix.

After some amusing bits with the telephone operator, Inspector Goring (a woman!) arrives. It’s difficult to know who is doing the investigating – she or Gillette who strongly identifies with his character Holmes. Let’s just say that there are enough motives, accusations and surprises to keep everyone wondering.

Scenic designer Daniel Nischan has created a spectacular set that will remind you of the Castle, if you have every visited it. He did in fact get to tour it before designing the set. It has stone, medieval architecture as well as knight’s armor, and an assortment of old weapons, some of which come into play.

Jacqueline Hubbard has directed a fine cast who seem as though they are truly enjoying themselves. For the most part, they are playing actors who are never “off-stage” and can be outrageous.

It is hard to pick out just a few cast members to praise. Craig MacDonald plays Gillette as a man who is a leader but is also partly deluded. It’s clear he is an actor who enjoys the limelight. But then there is Michael Iannucci and Katrina Ferguson as Felix and Madge, the older actors with both resentment and envy of Gillette, the “star”. Erik Bloomquist (a two time Emmy winner as a director/writer) infuses Simon with a studied casualness that immediately makes you wary of him. Molly Densmore plays Aggie, the ingénue who is not quite as sweet as she appears. Maggie McGlone-Jennings gives us the slightly deluded Martha, Gillette’s mother.

It was nice to see Beverly J. Taylor, longtime associate at the Playhouse in the extravagant role of Daria. She chews the scenery with the best of them. Then of course there is Victoria Bundonis as the Inspector who reminds you of many Inspectors in English mysteries.

The Game’s Afoot is a thoroughly enjoyable though silly evening in the theater that is being performed with expert timing.