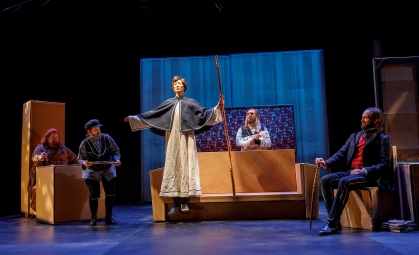 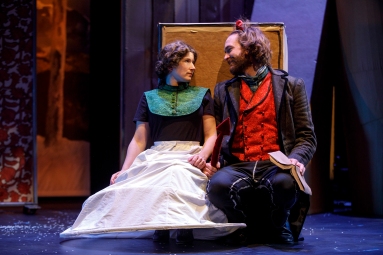 Field Guide which is now at Yale Rep through Saturday, Feb. 17 is an example of exactly what a university based theater should be doing: presenting works that push the boundaries and challenge audiences.

You may find the work, a world premiere commissioned by Yale Rep and developed by the Austin, Texas based Rude Mechs company not to your liking, perhaps even puzzling, but it is different.

Rude Mechs is a collaborative company whose members work together to develop productions; at times it shows that “too many cooks” can definitely make the soup less tasty.

Field Guide is based roughly on Dostoevsky’s massive novel The Brothers Karamozov which is about three brothers, their illegitimate half-brother and the father. But don’t worry if you haven’t read the novel or remembered it. The program provides a listing of “Notable Species” in the novel with all the male characters portrayed as bears and the females as birds, either predators or preys.

The company raises the question if Dostovesky did more than just create the novel? Did he create “a story that might guide us through our lives, a field guide for living?”

It’s a fascinating idea but one that does not really come through in the work.

So let’s focus on some of the work. First of all the lighting by Brian H. Scott is excellent and the music by Graham Reynolds and sound design by Robert S. Fisher are also excellent. Each of these three highlight aspects of the play.

One concern with Field Guide is expectations. It’s billed as inspired by the novel and, in fact, about half the 90 minutes are devoted to aspects of the central plot: the mystery of who killed the father and the romantic entanglements among the three brothers and the father.

It’s the other half that will puzzle you and perhaps infuriate you as you try to put it into the context of the other works. The play begins with Hannah, one of the company members who also wrote the text and plays three characters, performing a stand-up comedy routine. Her delivery may remind those older people in the audience of Cher’s monotone in the opening of the Sonny & Cher show. Not only isn’t the humor particularly funny (only some audience members laughed), but you sit there trying to figure out what the point of it is.

These stand-up comic elements are repeated at times during the show by Hannah and others. Each time the same questions occur.

Once they get into telling a destructed version of the novel, things do move along better. The main characters are sketched in such a way that you have a sense of each individual but too often, you are told what they are or what they feel rather than seeing it. That’s a problem when you condense even the main story of a massive novel to 60 minutes or so.

You will be left wondering about some of the staging. It is definitely clever, as when a series of various sized and shaped cardboard boxes move about the stage (the actors are inside them). Yet, why? How does this relate to the plot or the supposed message?

The ending is funny and unexpected – you probably have never seen anything like it on stage, but connecting to the rest of the show is difficult.

The performers are devoted to their craft. All except Hannah Kenah play just one role. Each does what he or she can with the limited material the script provides. Instead of fully developed characters, we get one dimensional descriptions. We are told the father is both a drinker and a seducer of young women, but we really don’t see it.  Ivan (Thomas Graves) is supposed to go mad, and Dmiti (Lana Lesley) is supposed to be in desperate financial straits. But you just have to take their word for it.

I’m not sure whether the purpose of Rude Mech is to deconstruct theater, move into avant-garde or absurdist theater or spoof the entire idea of theater. In some ways, they do all three.

For a 90 minute show, it seemed to be much longer at times. Yes, there were some startling moments that were moving or funny. But overall, Field Guide did not do what its creators indicated they wanted to do.