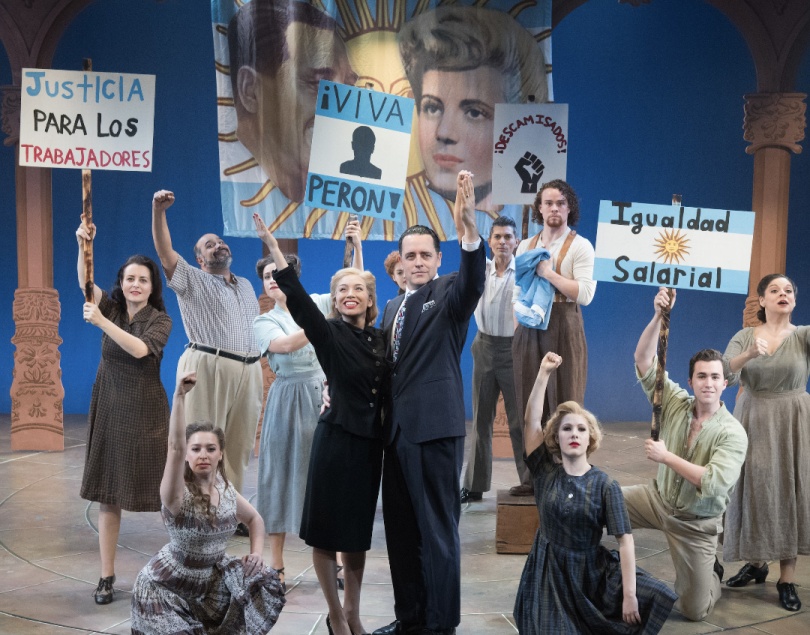 I wasn’t deaf when I walked into the sparkling new theater for ACT (A Contemporary Theatre) –Connecticut in Ridgefield to see Evita. But with the over amplification, I was nearly deaf when I left this up and down production.

One can’t help thinking that artistic director (and director) Daniel C. Levine has become so enamored with all the newest equipment that he is determined to use it all. The result is that some very good elements of this production that runs through Nov. 11 are over shadowed by gimmicks.

In the program notes, Levine wrote that he felt the show was so good that there was “no need to completely reinvent Evita by cleverly finding new and interesting slants to the story.” But it seemed as though he disregarded his own statements.

This is the story of Evita Péron, who began as a lower class girl in a small Argentinian town and who climbs the ladder of success using a variety of men as stepping stones. When she finally captures Colonel Juan Péron she helps him become Argentina’s dictator while gaining a fanatical following by the lower classes who viewed her as a saint.

But Andrew Lloyd Webber who wrote the music and Tim Rice who wrote the book and lyrics (there is little dialogue) decided to use a character based on the revolutionary Ché Guevera as the narrator/commentator on Evita’s rise to power. This added a note of cynicism and anti-establishment aura to the story.

The show starts promisingly enough with the small cast (12 ensemble plus some children) sitting in a movie theater watching a film when they learn of Evita’s death. (She died at 36 of cancer). After the funeral, we go back to the beginning of her story in the small town.

So we see Evita transform herself and help propel Péron to the Presidency where they both capitalize on the money available to them.

Most everyone knows at least “Don’t Cry for Me Argentina” whose melody is used multiple times in the show. But you may also recognize, “I’d Be Surprisingly Good for You,” and “Another Suitcase in Another Hall.”

The show depends on top notch performers as both Evita and Ché. It helps if the actor portraying Péron is also good. In this production, only Péron truly measures up.  Julia Estrada as Evita is not helped by the over amplification; the part has many sustained high notes, and she sounded very shrill on many of them. She also wasn’t helped by lighting that in some of the most important scenes put her face in shadows. Her Evita did not project the steely iron butterfly and overwhelming ambition the real woman had.

Angel Lozada also missed the boat Ché. He wasn’t the cynical, questioning revolutionary but almost an admirer of Evita. It is he that should give the show its moral compass, but this performance was too bland and too nice. There was no edge to it

As Péron, Ryan K. Bailer fared better. It is the tertiary role in the show, but he managed to bring a depth to the portrayal.

Both Julian Alvarez and Marlene Lopez Hilderley were good as Magaldi (the tango singer who helped Evita get to Buenos Aires) and The Mistress of Péron whom Evita replaces or “unemploys” her as she says.

The remaining ensemble play a variety of roles, from lower class workers, to military officers, society women, and more.

In a production that isn’t bad, there are so many little faults – an ensemble member who plays a military officer multiple times with a busy ponytail, to society women whose costumes don’t really look elegant enough.

And then there are the bigger failings. I’ve mentioned the over amplification and shrill sound but at times the backstage orchestra overwhelmed the singers. For a live production, too many special audio affects were used, perhaps to make the ensemble sound larger. In addition while there were some interesting lighting effects by Jack Mehler, too often they called attention to themselves and several times made it difficult to see the faces of leading performers.

Charlie Sutton did the choreography; he created several effects that were excellent. For example as the funeral ends, couples begin dancing which leads into the café in Evita’s home town where she meets Magaldi. But other times, the dancing seemed excessive, not reflective of the period, or inappropriate.

Overall, if you love Evita you will enjoy this; if you have never seen the show, it is a good introduction to it. But be warned that it you won’t need hearing aids.