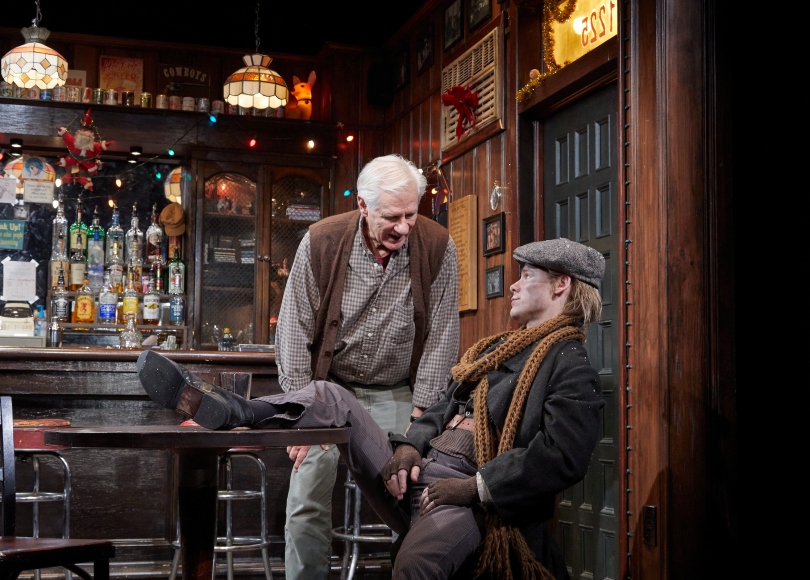 Once again, TheaterWorks is presenting Christmas on the Rocks through Sunday, December 23.

The show is a clever twist that adds a bit of cynicism to the usual holiday fare. But after seeing it several times, I’ve realized that there are hidden depths in these delightful pieces.

Artistic Director Rob Ruggiero called upon a number of playwrights with whom he had worked and gave them a challenge. To write a short scene about whatever happened to some of the classic children characters from various Christmas movies, TV shows and literature. Most of these works ended on an up-beat note. But what really happened afterwards?

The playwrights created a series of short scenes – many of them mainly monologues. And along the way they added in not only humor but lessons of how we go on and how we can always recapture the optimism of youth.

It is set in what is described as “a local bar in a lonely corner of the cosmos, Christmas Eve.” This is your typical run-down neighborhood bar, worn and out of date. The bartender is switching between Christmas films on TV as the bar is empty.

In seven scenes, two talented actors become some of the very well-known children from these stories and occasionally a lesser known character. In the last few years, two new scenes have been added (and two deleted). Both are about lesser known child characters – Karen who created Frosty and now resents the attention he has received and ZuZu Bailey one of the children from It’s a Wondrful Life. I’m not sure either live up the others: John Cariani’s piece about Ralphie

from A Christmas Story; Jeffrey Hatcher’S has a hysterically funny piece about Hermie, the elf who wanted to be a dentist in the TV version of Rudolph, the Red-Nosed Reindeer. Theresa Rebeck’s cynical Tiny Tim who believes that Scrooge had a mental breakdown; Tim also seems to have adopted some of Scrooge’s miserly attitudes. The last two are about Clara, from The Nutcracker.  She is now an aging beauty still in love with the ageless Nutcracker. And the show ends with a tender piece by Lamarre about Charlie Brown. His revelations are surprising, but the ending is sweet.

Ruggiero has directed this with a sure hand. A new actor has joined the cast: Randy Harrison who is perhaps best known for his appearances on “Queer as Folk.” He brings a subtlety to the characters that unfortunately is lacking in Jenn Harris’ performance as the various female characters. Too often, all of them seem equally “over-the-top” and straining for laughs. Tom Bloom is in his second year as the bartender and he has developed the role farther.

Like any good bartender, he listens, he reacts and occasionally he adds a succinct comment or suggestion. He is part therapist and part grandfather. It is this character that often helps the others to leave more optimistic than when they came in.

As you leave Christmas on the Rocks, you may ponder the ideas that what we assume will happen often doesn’t, but that other possibilities open to us, if only we will take advantage of them.

This show is geared to adults or near adults.

Christmas on the Rocks is at TheaterWorks, 233 Pearl St., Hartford. For tickets visit TheaterWorks or call 860-527-783