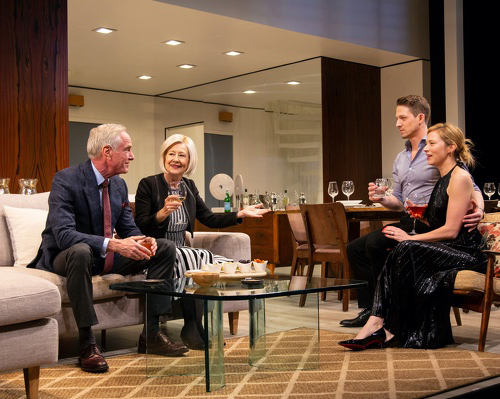 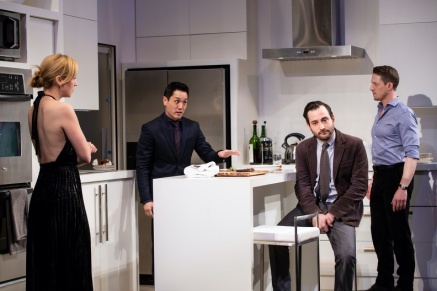 World premieres are unpredictable – some are very good and others show that they need extensive work or that the playwright has gone off the track.

It is terrific to report that The Engagement Party, the world premiere drama by Samuel Baum that is at Hartford Stage through Sunday, Feb. 3, falls into the first: it is a very satisfying evening of theater.

Undoubtedly that is due to director Darko Tresnjak, his fine cast and production, as well as the taut writing of Baum.

The play set in Manhattan in January 2007, takes place in the plush duplex apartment of Josh and Katherine; two very successful 30-somethings who have invited some friends to celebrate their engagement. Josh is in finance and Katherine is a doctor. Among the guests are her parents (he’s a prominent investment broker), their friends (Kai and Hailey), a third friend, Alan, and Josh’s childhood friend from Brooklyn, Johnny.

It seems as though it will be a pleasant evening: her parents seem delighted with the engagement; the couple have known each other since Harvard. The friends also seem delighted even if Johnny’s rough exterior is at odds with the others.

Yet you can sense some underlying tensions. Kai works for Josh; Hailey, also a doctor has been on extended maternity leave; and Alan, a college philosophy professor seems uncomfortable with what he views as unnecessary affluence and spending. In fact Kai, asks Josh to help Hailey get a job by talking with his future father-in-law. When Josh doesn’t immediately say yes, Kai is upset.

But all is going well until during the dinner, Katherine’s, very large and very expensive, engagement ring is passed round the table. Some wine is spilled. After it is cleaned up, the ring is missing.

That is the impetus for secrets to be told, motives to be questioned, relationships to be strained and much more.

Where is the ring? It is nowhere to be found. Did someone take it? If so, who and why? And why are Josh and his future father-in-law so edgy with each other?

Josh is obviously upset, more than Katherine who just assumes it will be found. Josh is so determined to locate the ring that he violates trust and relationships.

It would spoil the play to reveal some of the secrets that come out and how devastating they are. But you will be shaken by the end and questioning almost everything.

At the heart of the play is how deception and lies can destroy trust and how fragile relationships are.

Alexander Dodge has created a magnificent set; the duplex apartment rotates so we can see the dining/living area, the kitchen and later the upstairs bedroom. The rotation focuses our attention on the relevant playing space while blocking what is going on in other areas. The lighting by Matthew Richards accentuates these.

Tresnjak has gotten the most out of his actors; each totally captures the character. At the center is Zach Appelman as Josh. He was terrific some years back in Hamlet also directed by Tresnjak. In the portrayal he slowly peels back the layers of Josh finally getting the core. As Katherine (played beautifully by Beth Riesgraf) parents, veteran actors Mia Dillon and Richard Bekins are perfect. The others are also excellent. Teddy Bergman is Alan, the philosopher who seems caught in the middle between Josh and Kai; Brian Lee Huynh as Kai, the friend/employee who is seething with resentment; Anne Troup as his less functional wife and finally, Brian Patrick Murphy as the definitely lower class, plain talking Johnny.

The Engagement Party, by the end, will have you guessing about what may happen next.