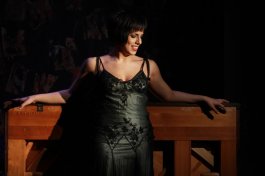 Cabaret is now at MTC (Music Theatre of Connecticut) in Norwalk through Sunday, April 14. This production has many good elements and yet, there is something lacking.

Certainly the intimate theater space with audience members usually less than 20 feet from the stage, lets us all feel as if we are part of the cabaret.

Director Kevin Connors has proven that he can take larger musicals and not only make then fit on his stage but also make the reduced number of cast members work extremely effectively. He did it with Evita and then Fun Home. But in this production, the limited cast impacts the show negatively and makes for some awkward doubling up of performers.

Just three women are in the cast and one is the middle aged Fraülein Schneider. So that leaves Sally (Desirée Davar) and Fraulein Kost (Hillary Ekwall) to serve as all of the Kit Kat Girls, with Ekwall playing a number of roles. It can get a little confusing. On the male side it is easier since we have the four major male characters (the Emcee, Cliff, Ernst and Herr Shultz). Two others – called Man 1 and Man 2 in the program take on all the other male roles.

For any of you who have never seen Kander & Ebb’s Cabaret, it is the story of an American writer who arrives in Berlin in the mid-1930s to find inspiration for his novel. He does when he attends a seedy cabaret and meets Sally Bowles, an English performer at the cabaret whose devil-make-care attitude entrances him. He also is befriended by Ernst Ludwig, a German who is a Nazi sympathizer. But at the heart of the show is the Emcee who not only keeps the cabaret running but whose songs and antics underline the relationships and seriousness of what is happening in this world.

In a parallel to Sally and Cliff (she arrives with her suitcase to live with him) is the landlady, Fraulein Schneider and her lodger and wooer, Herr Schultz.

As I was watching this production, I was confused at times regarding which version of the show was being used as this basis for this production. Besides the film, which made major changes to the various subplots, three versions are available for theaters to use: the original from 1966, a revival/revision from 1987 which original director Hal Prince was involved with and then the very successful 1993 version that started in London and had long runs on Broadway twice. Director Sam Mendes was involved with some of the revisions.

Some musical numbers and their placement in the show are changed in each of these. Songs written for the film were included in both the 1987 and 1993 versions. Yet this production does not follow any of these. Thus some songs (and their usual replacements) were eliminated entirely.

In an aside, John Kander – the only surviving member of the triumvirate who wrote the book, music and lyrics – recently worked with a NYC school to present his “ideal” version of the show.

Overall the cast was good but some weaknesses detracted from the overall impact of the show. At times Desirée Davar who plays Sally seemed to be channeling Liza Minelli in both looks and sound; at other times there was an attempt at an English accent. She just didn’t compel our attention. Eric Scott Kincaid as the Emcee was also  good but he too didn’t always force our eyes to him.

In reality the most compelling performers were Anne Kanengeiser as Fraülein Schneider and Jim Schilling as Herr Shultz. These two gave refined and fully developed performances that were a joy to watch. Hillary Ekwall’s Fraülein Kost seemed at times too “pure” – after all the character is a prostitute.  The writer, Cliff Bradshaw is a character that is more observer than participant; Nicolas Dromard does a good job with it as does Andrew Foote as Ernst Ludwig, the Nazi sympathizer who befriends Cliff.

Special praise should be given to Tony Conaty (Man 2) and Alex Drost (Man 1), They play everything from waiters, soldiers, a gorilla and more. They do the most they can with these minor roles.

The musical direction by Thomas Conroy is good. In many productions the band interacts more with the Emcee and usually has some women members. This group is a more typical group of musicians that while seen by the audience, do not interact with the cast.

While this may not be the best production of Cabaret, it is still an enjoyable entertainment.