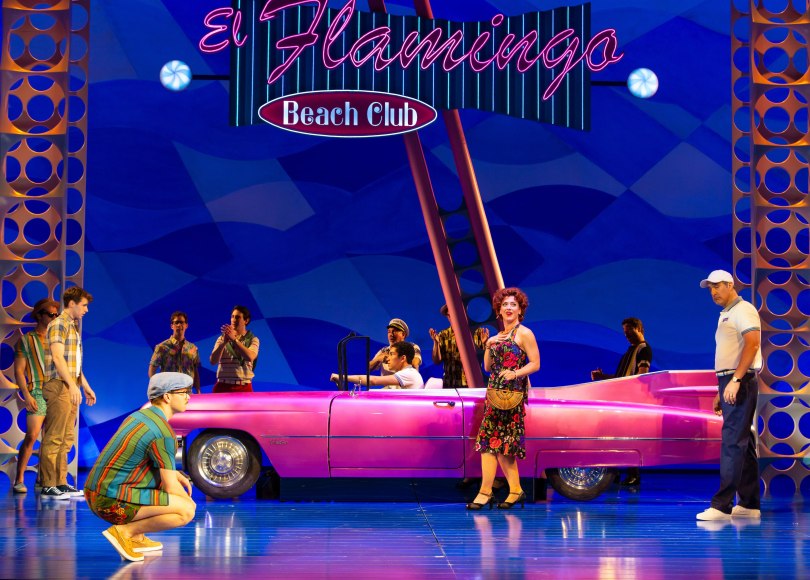 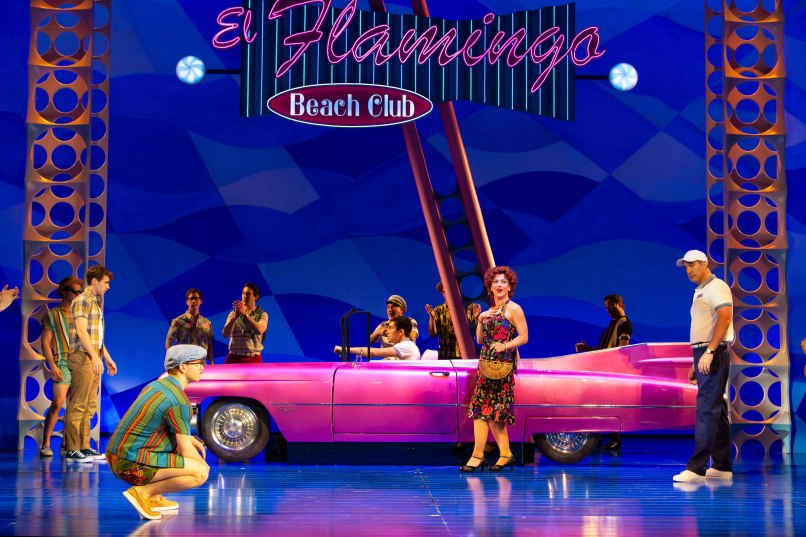 Darko Tresnjak is going out with a delightful, tuneful musical that will touch your heart. For his last show as artistic director at Hartford Stage he has directed the world premiere musical, The Flamingo Kid now through Saturday, June 15.

Will it end up on Broadway like the other two musicals (The Gentleman’s Guide to Love & Murder and Anastasia) that started life at Hartford? Who knows?

But this has many elements which with some work could make a fine Broadway show; certainly as good as many I’ve seen in the last few years.

The plot and title come from the 1980s film written by Garry Marshall and Neal Marshall (no relation) that starred Matt Dillon. It’s based on Neal Marshall’s experiences.

The show tells the story of Jeffrey, an 18-year-old Brooklyn kid from a hard-working family who gets a job at the El Flamingo Beach Club on Long Island; its members are many Jewish families who had left Brooklyn.

It is a typical first love, coming-of-age story. This means it has predictable elements. Jeffery will seek independence from his father (a plumber) and mother by falling under the spell of the owner of an auto dealership, Phil. As he starts rejecting his father’s values and plans for him (college), the inevitable clash occurs. Plus, he falls in love with Phil’s niece (Carla) and his friends are also heading away from his father’s values.

What happens is also predictable. He learns that the world isn’t exactly as he thought it was, and that Phil’s values aren’t all what they seem.

Set in the ‘60s, the music by Scott Frankel and lyrics (and book) by Robert L. Freedman really captures the period. It reflects the early rock sounds while also including a dash of Broadway. Frankel was recently on Broadway with War Paint and before that Grey Gardens, both excellent scores. Freedman wrote the book and co-wrote the music and lyrics for the hit, A Gentleman’s Guide to Love & Murder.

Act one starts slowly; this is the area that needs the most work. We meet Jeffrey and his friends commiserating about being in Brooklyn in the summer. But soon his friends invite him to the El Flamingo (one of them is dating Phil’s daughter) and he is hired as a parking lot attendant. After talking with Phil, who is the gin rummy champion of the club, Jeffrey is promoted to cabana boy. The older women members of the club love oogling the cabana boys and making comments about their bodies. It results in lots of tips and soon Jeffrey, who seems to be a favorite, is making a lot of money.

As he gets more and more caught up in the club, he begins spending less time at home, blowing off the traditional Sunday night Chinese restaurant dinner and spouting Phil’s philosophy which is diametrically opposed to his father’s.

The summer goes on and the conflict between father and son gets steadily worse, particularly when Jeffrey tears up his college application, says that Phil will hire him as a car salesman and college isn’t needed. He even moves out of the apartment.

But we begin to see some cracks in the El Flamingo Eden: the wives are for the most part unhappy and bored and often pursuing outside pleasures; the men also stray. Phil is aging and not liking it, and Karla doesn’t like the young man Jeffrey is becoming.

Of course, a series of events leads him to opening his eyes and realizing that his father was right about so many things.

Tresnjak has directed this with a deft hand; he focuses on the personal relationships. The final reconciliation between father and son, may be predictable but is also touching.

The major characters are well drawn and acted. They aren’t caricatures but people we can identify with and feel empathy with.

The contrast between Phil, played by Marc Kudisch and Arthur (Jeffrey’s father) played by Adam Heller is stark. Phil is taken with himself but aware he is aging. Arthur is down-to-earth but takes no nonsense. Each has songs which clearly delineates their points of view: Phil with “The World According to Phil” and Arthur with “A Plumber Knows” and “This Is My House.”  Jeffery’s mother (Ruth) played wonderfully by Liz Larsen) is a complete contrast to Phil’s wife (Phyllis) played by Lesli Margherita. Ruth is the woman content to be a housewife and Phyllis is feeling the call of the new women’s movement. Again the songs show off the contrast.

In a great touch, Karla is reading The Feminine Mystique which had just been published.

With these four supporting players, and Karla, played by Samantha Massell, Jimmy Brewer has tough acts to follow as Jeffrey. He starts slow but his performance soon develops and draws you in. This is a good kid whose head is turned before realizing the mistakes he made.

The scenes between him and Arthur are electric, especially the ending duet “Fathers and Sons.”

Alexander Dodge has created a terrific scenic design that absolutely sets El Flamingo in the early ‘60s with turquoise and other typical colors. Linda Cho has a field day with the ‘60s costumes and lighting designer Philip Rosenberg bathes the stage in summer light and dim apartments.

The choreography by Denis Jones includes references to the early ‘60s fads including various rock dances and rhumbas.

Yes, the show needs work. But it has potential. Even in its newborn state, it is a very enjoyable evening’s entertainment.

This content is courtesy of Shore Publications and zip06.com