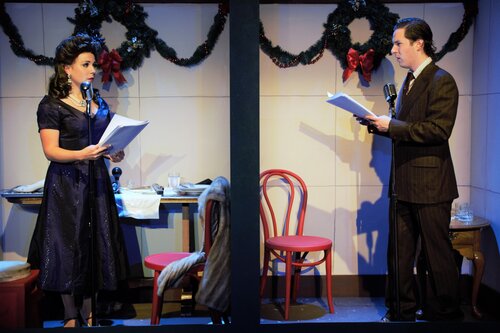 MTC in Norwalk has been the only Connecticut theater to produce shows with a live (though very limited) audience.

So, for the holiday season they decided to present the theater piece by Joe Landy, that imagines a radio station in the 1940s producing and airing It’s a Wonderful Life. It streams live through Dec. 20.

MTC has done the show successfully in the past and this time Landry and director Kevin Connors made changes to adapt it to the protocols needed to keep everyone sate.

These included eliminating some of the enjoyable aspects of the work. Yet it was still good to stream it live.

What were the significant changes? First the cast was reduced to just four people; three men and one woman. The sound effects person was eliminated in favor of the actors handling these effects. Interaction was minimized to the point of almost none. Rather than the actors coming into the studio and greeting each other as they prepare for the start of the broadcast and then, sharing microphones, here the four actors are each in what looks like a small individual recording studio with a microphone.

What didn’t change is the terrific 40s costumes, the fun of three actors constantly changing roles and voices, and the story itself.

So in balance, this is perhaps as good a production of the show as we will get in this strange year.

Each of the four performers, play a specific actor with a distinct backstory. Elissa DeMaria plays Sally Applewhite who has had a brief Hollywood career. DeMaria does all the female roles. Matt Grasso, as the actor Jake Laurents plays George Bailey. Jeff Garner who as Freddie Filmore is the announce splits all the other male roles with Harry “Jazzbo” Heywood, played by Jim Schilling. These two are everyone from the taxi driver, cop on the beat, pharmacist, George’s friends and his brother and Mr. Potter and more.

While you could be disappointed in all that had to be removed from the show, it is better to view it as a “glass half-filled” situation. It’s a terrific story and it is live theater.