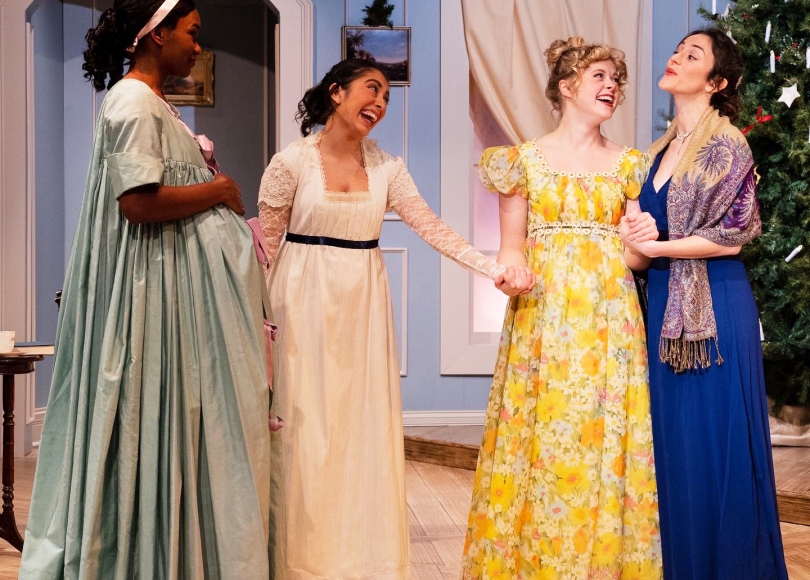 The popularity of author Jane Austen, and in particular her novel Pride and Prejudice has spawned a cottage industry of books, movies and now plays that use those characters.

The latest, at least for me, is the play at Playhouse on Park in West Hartford: Miss Bennet – Christmas at Pemberley running through Sunday, December 19

This is a thoroughly delightful and delightfully performed spin-off. The Miss Bennet in the title is the middle sister, Mary. You may recall that Mary is the quiet one who reads and plays piano. Like a typical middle child, she is unseen by almost everyone – her two older sisters Elizabeth and Jane and her boisterous and silly younger sisters Lydia and Kitty.

The play is set two years after Elizabeth and Mr. Darcy have married and settled at his home. The family is arriving to celebrate Christmas.

Do you need to be familiar with the book? It doesn’t hurt to know some of the goings on before the start of the play – Lydia’s impetuous marriage and her unscrupulous husband, Mr. Darcy’s prior involvement with Lady de Burgh, a cousin, and Jane and Mr. Bingley’s courtship.

Yet, you can thoroughly enjoy this with practically no prior knowledge. Playwrights Lauren Gunderson and Margot Melcom gives us enough reminders to fill in the most important blanks.

Mary has spent the past two years with her parents reading and improving her piano skills; she is now a virtuoso. But she is lonely and fears her life will remain that way. Luckily for her, a distant cousin of Mr. Darcy arrives. He is also bookish, quiet and not comfortable in social situations. Like Mary, he has little ability at small talk or tact.

If you can’t see where this is going, I would be surprised. Of course the two are attracted to each other but are too insecure or shy to say anything. Various monkey wrenches are thrown into the mix to cause doubts, break ups and confusion including Lydia’s flirtations with Mr. de Burgh.

Once again Mr. Darcy and Mr. Bingham as well as Jane and Elizabeth come to the rescue to help sort everything out for true happiness.

It could be said that they arrange a marriage of true minds.

This has been smoothly directed by Sasha Brätt to retain the sensibility of the early 1800s with a modern touch. The setting by Anna Brewster is open and the costumes by Lisa Bebey seem accurate for the period.

But it all boils down to the cast. Here Brätt has done a good job. Sidney Torres is terrific as Mary Bennet who learns to stand up for herself. Her sisters match her – Dakota Mackey-McGee is insightful as Elizabeth, Kristin Fulton is warm and loving as Jane, and Laura Axelrod is annoyingly flirtatious and self-absorbed as Kitty.

Griffin Stanton-Ameisen is fine as Mr. Darcy and Ted Gibson is appropriately bumbling, acquiescent and confused as Mr. de Burgh. The only thing, he does look rather young.

Anyone who enjoys Austen or who enjoys literate drawing room comedy will have a great time as Miss Bennet – Christmas at Pemberley.

This content is courtesy of Shore Publications and Zip06.com