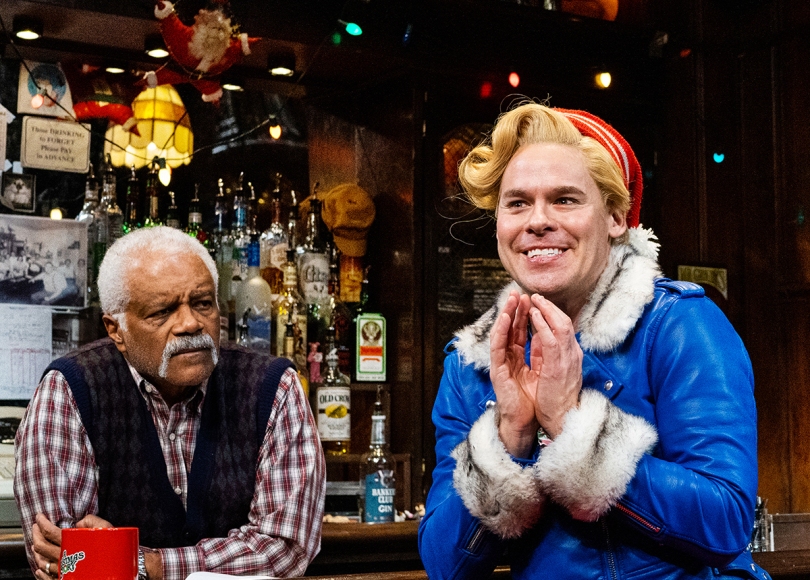 I had forgotten just how delightful and funny Christmas on the Rocks was until I saw this year’s production at TheaterWorks, running through Thursday, Dec. 23.

Was it having missed it last year? Or the new cast member? Or perhaps, just the joy of being in a theater surrounded by people having a good time.

This has become a Hartford tradition just like Hartford Stage’s A Christmas Carol, though that is not returning until next year.

Christmas on the Rocks originated in Hartford when artistic director Rob Ruggiero convinced a number of well-known playwrights to imagine how life turned out for some of those Christmas entertainment children. Thus the subtitle An Offbeat Collection of Twisted Holiday Tales.

What happened to them? As one of them explains – these characters and families became so beloved that they became real. But being “real” has its downsides: mistakes are made and happy endings are ensured.

You have seven short playlets, with the various characters arriving at a typical neighborhood bar on Christmas Eve.

The bartender – the wonderful Ted Lange – listens, asks questions and reacts to their stories. Some of you will remember Lange from his role as the Bartender on The Love Boat,

But as you waiting for the play to begin, snippets of the original works are shown and you can take a close look at the wonderful set by Michael Schweikdardt. It is a seedy bar (think 1950s), and if you look around you will see a crutch, a lamp in the shape of a leg, a reindeer and more, all alluding to the works referenced in the plays.

Randy Harrison returns to play the male characters beginning with Ralphie (or Ralph as he prefers) from A Christmas Story right through Tiny Tim, Hermie from the animated TV Rudolph and ending with Charlie Brown. He is terrific. You might not recognize him as he totally morphs into each character – Tiny Tim is cynical, Charlie is sweet and Hermie is over-the-top.

This year Jennifer Cody plays the female characters – from Zuzu who has been traumatized by bells, Karen from the animated TV Frosty the Snowman, Clara from The Nutcracker and ending with the Little Red Haired Girl. Her characters are more exaggerated than Harrison’s, but she still creates tender moments.

The last scene, which brings all three together is the sweetest – it’s the one based on Peanuts.

This is the most “adult” of the holiday plays I’ve seen recently. It is best for teens and adults. For tickets and Covid protocols  visit TWHartford.org

This content is courtesy of Shore Publications and Zip06.com.