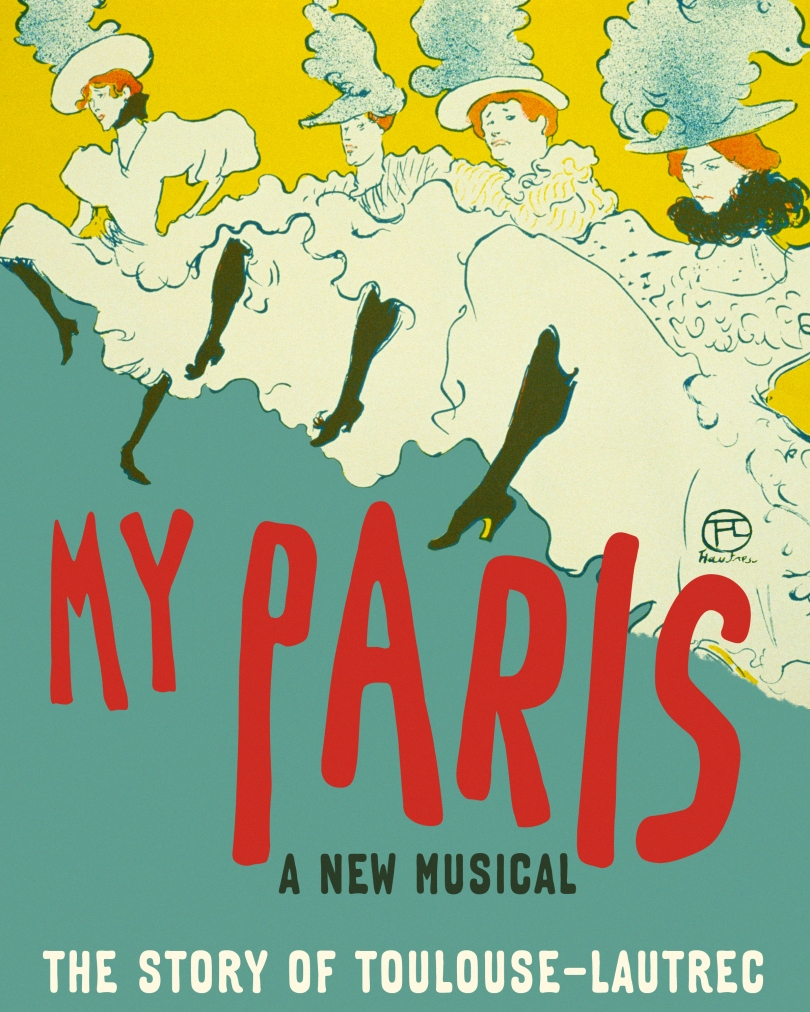 Goodspeed’s Norma Terris Theater in Chester is a place where musicals are given early workshop productions – professional casts, directors, sets, costumes, etc. – to let the creative team – book writer, composer and lyricist see how it all works in front of an audience.  It is a beginning.

Some shows never go much further, others have numerous productions around the country and a few, a very few, go on to Broadway.  Amazing Grace which began at Chester has just opened on the Great White Way.

My Paris, the current production on the Norma Terris stage through Aug. 16, is a new musical but one with a long history.

Alfred Uhry, the book writer, explained some of this history during a talk at R. J. Julia’s in Madison.

The music is written by Charles Aznavour – a world famous French performer who is sometimes referred to as the “French Frank Sinatra.”  Aznavour, who is still performing into his 90s, over the years wrote more than 30 songs for a musical about Henri Toulouse-Lautrec, an aristocrat who became famous for his drawings, posters and art of Paris’ seamier side – the music halls, the streetwalkers, and the can-can dancers in the late 1800s.

Uhry pointed out that Lautrec was not a midget as some may think from various movie representations;  he suffered from a congenital defect of weak bones that resulted not only in multiple fractures but also caused his legs to stop growing while he was still a child.

Director Kathleen Marshall became interested in the project several years ago and asked Uhry who in addition to writing Driving Miss Daisy has also written the book for various musicals (Parade, LoveMusik), if he would be interested in writing the book for this show.

“I said ‘sure’,” Uhry said.  He soon received a package of tapes from Aznavour of the songs all in French.  “I didn’t have a clue about what they were about.”

In fact, there had been a British production using some of the songs – Aznavour continued to write additional music – in 2000 called Lautrec. It had a brief run and Aznavour reported “hated it.” [After looking at some of the reviews of that short-lived production it seems it was fatally hampered by a tedious biographical book and what once critic described as “tin-eared” lyrics.]

My Paris is a new show – it focuses on reproducing some of Lautrec’s most famous works on stage as well as the relationships he had with three women important in his life: his mother, the performer Jane Avril, and his mistress and muse Suzanne Valadon.  An artist in her own right, she was also the mother of the artist Maurice Utrillo.

As Uhry explains, the 90-minute show attempts to let us see what Lautrec saw; it was a sordid world he lived in yet he saw beauty in it.

Though he died young (at 36) and lived a life of excess, the show, Uhry said is full of joy.

In Uhry’s view, he was not writing a biography.  “My role is to tell the story and set up the songs.  Songs don’t tell stories, they illustrate.”

Since literal translations of lyrics from other languages usually do not work well.  Kathleen Marshall convinced Tony winning composer/lyricist Jason Robert Brown to rewrite the lyrics.  In some cases, Uhry said, they express the same point or emotion as the original French lyrics but other cases they are totally different from the meaning of the French lyric.

“We are creating a new musical based on what Aznavour has indicated he would like,” Uhry said.

As part of the talk, Donna English who is playing Lautrec’s Maman (mother), Adele, introduced the audience to the song “Where Are We Going.”  As his prime caregiver, English said Mamon both recognized that Lautrec had to break away from her as he grew older but because of his delicate health, was concerned for his well-being.

Mara Davi who plays Suzanne in the show sang “What I Meant to Say.”  She’s done extensive research on Valadon who died in the 1930 and had her art works exhibited throughout the world.

Bobby Steggart who has starred in Big Fish and Ragtime plays Lautrec.

No one know what will happen to My Paris after it leaves the Norma Terris – undoubtedly a lot a more work and then, perhaps onto Broadway.