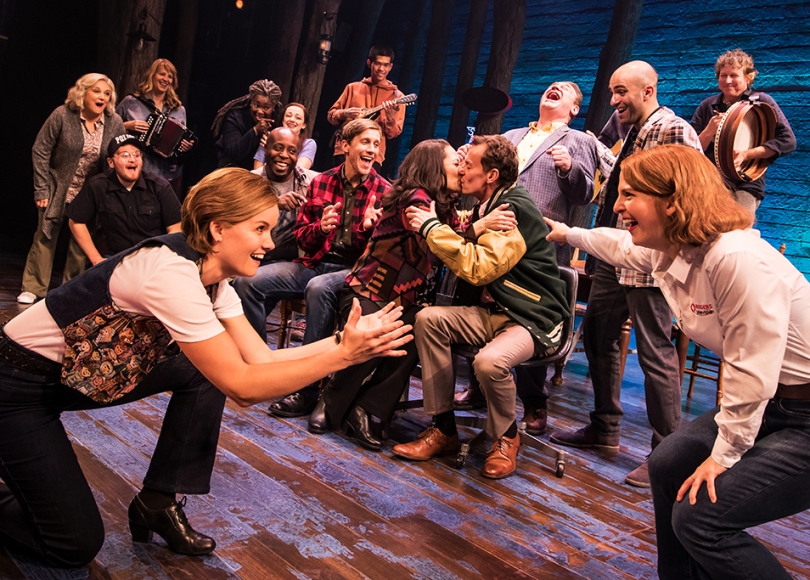 Now, more than ever, it seems we need things that remind us of the innate goodness of people, of their willingness to sacrifice and help others, to be neighborly. So make sure you get to the Bushnell by May 5 to see the outstanding national tour production Come from Away.

Come from Away is a musical that does just that, not in a saccharine, manipulative way, but with truth and heart.

How did anyone think the story might be a good idea for a musical? It is about the city of Gander, Newfoundland and the people in it and the surrounding towns who on Sept. 11, 2001 suddenly had 35+ jets land with more than 7000 passengers. American airspace had been closed, and jets flying from Europe and other locations were told to land there. No one had any idea how long the planes and passengers would be on the ground. But these passengers needed to be fed, housed, clothed and befriended.

The citizens of Gander and surrounding towns showed what true goodness is like as they came together to gather supplies, cots, bedding, food, medicine, toothbrushes, deodorant and more.

The authors, Irene Sankoff and David Hein, have skillfully created a multitude of characters including town residents and passengers. They have intertwined these stories so we slip smoothly from one to another. We are never bothered that one performer is playing multiple roles and we always know who each actor is at a given moment.

They have also avoided for the most part stereotype characters. In fact, they drew their stories from stories of the actual passengers many of whom returned for the 10th anniversary and have kept in touch with the townspeople they met.

Yes, there is the gay couple, the Arab man, the British businessman who meets a divorcee from Texas, the woman whose son is a NYC firefighter and more. But these seem like surprisingly well rounded characters. The one pilot we meet is the first woman captain for American Airlines. Among the citizens are the Mayor, the woman who runs the Humane Society, the school teacher, the school bus driver, the air traffic controller and more.

They don’t sugar coat the story either. The town’s school bus drivers are on strike and for many hours refuse to suspend the strike to ferry passengers from the airport to the various surrounding towns that have offered to assist. (Many passengers were on the planes for 24 hours before being allowed off.)  There is the Arab man who is detained and questioned; later his offers to help with the food are summarily dismissed until near the end; he says he is an executive chef for a hotel. There’s also the African family who is afraid they are being kidnapped, and the African-American man who is worried he will shot when told to go and take barbeque grills from backyards or that his wallet will be stolen.

This is a true ensemble, in fact most of the songs are listed as sung by “the company.” This cast come close to the outstanding original cast. It may be difficult to single out performers but in this production I felt that Harter Clingman, Chamblee Ferguson, Julie Johnson, Andrew Samosky, Nick Duckart and Danielle K. Thomas were standouts. Each excelled in all the roles they played.

One of its very earliest stops was at the Goodspeed Festival of New Musicals where it had staged reading.

The songs fit into the show perfectly and I’m looking forward to hearing the cast CD which also available.

Praises to director Christopher Ashley who has handled the multiple stories beautifully and Kelly Devine who is created with the musical staging, which I assume also includes the choreography.

Beowulf Boritt has created a simple but atmosphere set aided by the lighting design of Howell Binkley. Toni-Leslie James’ costumes help us keep the characters straight.

Seldom is the orchestra singled out in a review, but this group of musicians, located on the stage are terrific and after the curtain calls, gives the audience a rousing, “impromptu” concert.

The music and the orchestrations blend music of various genre including traditional folk type music with more Broadway music.