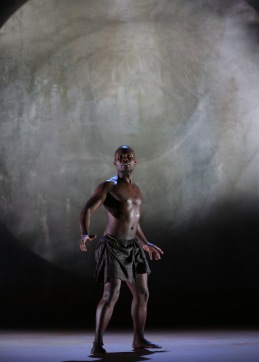 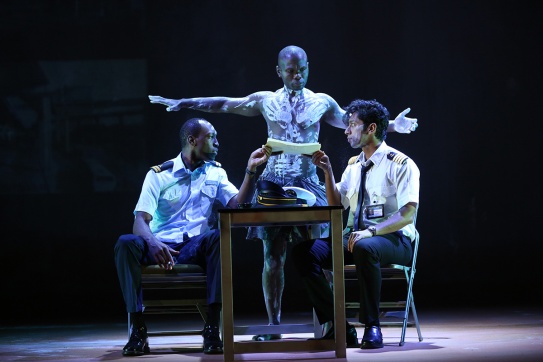 Elephants are disappearing. These magnificent creatures number under 400,000 worldwide.

The biggest reason why is the demand for ivory, particularly in the Far East. This demand and the money it can bring, encourages the poachers who track, kill and mutilate them in the process of removing the tusks. It also encourages all the people along the way who really know that the ivory is illegal but still trade and buy it.

But how do you put this on the stage without it becoming a lecture or a sermon?

Lynn Nottage not only found a way to do it, but created a fascinating and depressing story of human greed and inaction.

A four member cast shows us all the steps in the process of moving these embargoed goods from the poacher to the customer. At each step along the way, people try to pretend they don’t know, but they are well aware what they are doing.

The story begins with Jermaine Rowe as Mlima, a tusker which means an older elephant who has developed exceptional tusks. Mlima is a bull elephant of 40+ years who feels the poachers closing in on him. We hear him warn several other elephants to leave the area. But the poachers get him. Mlima doesn’t disappear; he becomes a ghost like figure who observes each step in the illegal trade route and marks each one individual involved with white chalk.

So we go from the poachers to the police captain who is paying them for tusks, to the game warden who is truly upset but has some responsibility, to the government minister who is all sound and fury but doesn’t provide the staff and the funds to effectively protect the elephants.

Because Mlima is a tusker, it will be very difficult to get his tusks out of Kenya, where they will fetch a very high price.

Nottage shows every step along the way. If one person turns down the opportunity (a ship captain), another is more than ready to step in and accept the cash (a crew member on the ship). Many express awareness of the illegality and even of concern for the elephants, but that doesn’t stop them.

Through a series of scenes, Nottage takes us all the way to a master carver in China who has convinced himself that these are antique tusks from before the ban.

Rowe as Mlima haunts each scene, as the other three players create a wide variety of characters. They changes clothes on stage and voices and demeanor as they move from male to female, from Kenyan to Chinese to Vietnamese to American.

Mark Lamos has directed this with sensitivity and toughness. The play moves almost cinematically between scenes and locations.

The projections by Yana Birykova are outstanding. Adding to the total experience is the music by Michael Keck and lighting design by Isabella Byrd.

This is a truly theatrical play that demonstrates how art can illuminate serious issues. You will be totally engrossed while you are disturbed by what is happening to these magnificent animals and our inability to halt it.