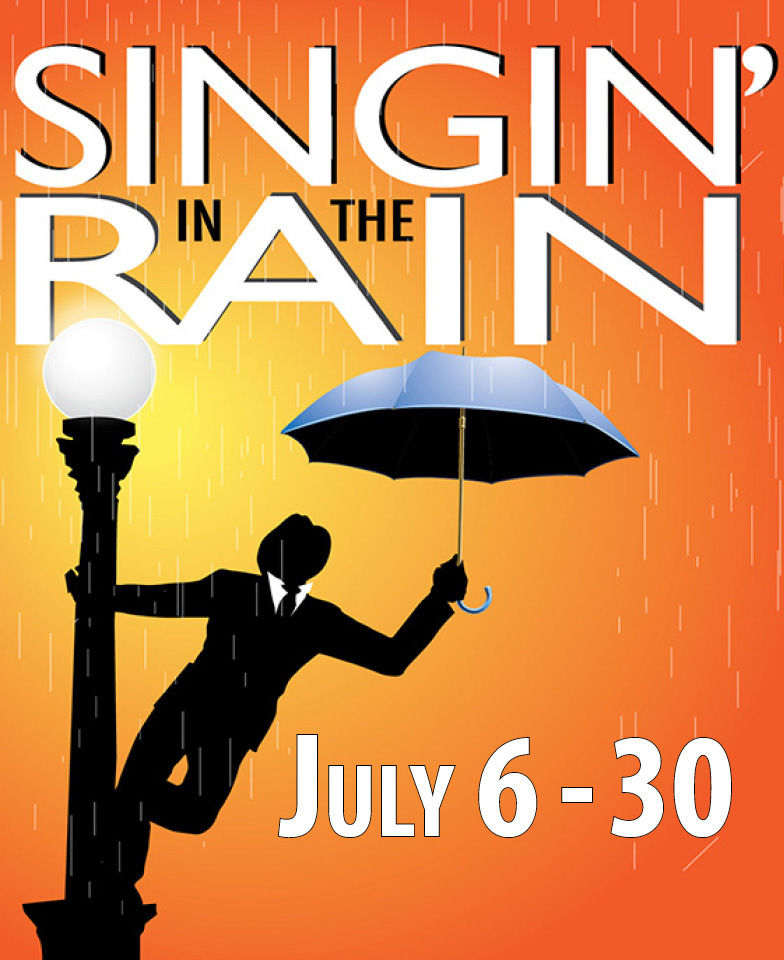 Singin’ in the Rain is a classic movie musical – most critics put it in the top five film musicals – that was converted to the stage in the 1980s and ran for approximately a year on Broadway.

Like other musical films made into stage shows – Gigi and Seven Brides for Seven Brothers come to mind – the stage productions usually come up short in comparison with the classic films. The range of settings, costumes and special effects are hard to duplicate on stage. The iconic film performances force stage directors to either try to duplicate them or go in totally new directions. Either is a minefield.

The Summer Theater of New Canaan (STONC) which performs in a tent in Waverly Park has taken a mixed approach. In some cases, it seems as though the show has been cast to resemble the film performances and in other places, to vary widely from them.

Overall this production, which runs through July 30 is enjoyable summer entertainment. It’s a good effort, but you won’t recall either the performances or the production when autumn arrives.

For those who don’t remember the film, the story is about the motion picture industry in the late 1920s as talking movies sweep the country. The two silent stars, Don Lockwood and Lina Lamont, have made a series of smash swashbuckling romances, all very similar. They’ve been built as a romantic screen couple which Lena assumes carries over into real life; Don has other ideas. In fact, he meets a plucky newcomer (Kathy Selden) and is smitten.

With the talkies now all the rage, the duos latest film is a bust even with talking in part because Lena’s voice does not match the sophisticated, romantic role she is playing. So the decision is made to turn it into a singing/dancing film since Lockwood (and his buddy Cosmo) had been in vaudeville. But Lena can’t sing. What to do? The idea is for Cathy to dub Lena’s speaking and singing voice.

All is well until with the new musical film a smash,  Lena demands that Cathy continue to do that, thus giving up any career on her own. But Don, Cosmo and even the studio head come to the rescue, totally humiliating Lena.

The most famous song/number from the movie was Gene Kelly dancing in the street and splashing in puddles while it rains heavily.

Yes, STONC has rain on the stage.

Director Melody Meitrott Libonati has done a good job with a cast that includes a number of Broadway veterans and a 10 piece orchestra under the direction of Kenneth Gartman.

The difficulty is in either reproducing or recreating the iconic performances (Gene Kelly, Debbie Reynolds, Donald O’Connor and Jean Hagan as Lena).

David Rossetti is probably the most successful as Cosmo, the role played by Donald O’Connor. He doesn’t look or sound like O’Connor. Yet that is an advantage; he seems like a cross of O’Connor and Oscar Levant. His big number, “Make ‘Em Laugh” isn’t as athletic as O’Connor’s but still gets the point across.

Jody Stevens gets to play the villain, Lena Lamont. The role calls for the character to look like a ditzy platinum blonde, with the voice of a Brooklynite. Stevens carries it off well. In addition, she lets us know that underneath the “dumb blonde” routine lurks a conniving mind and steel will.

As Don Lockwood, Matthew Tiberi dances up a storm and has a good singing voice. Yet, somehow I did not feel the charisma needed for a character who is a movie star. He just seems like a pleasant, talented average guy.

With the role of Cathy Selden, too many directors cast the role in ways that will recall Debbie Reynolds – smaller stature and then compound it with hair that resembles her as well. Annabelle Fox is given the unenviable job of trying to create a Kathy that doesn’t seem like an imitation of Reynolds. She is only partly successful.

This isn’t entirely her fault. She sings and dances well, but too often line readings and gestures recall the film.

Doug Shankman has done a good job with the choreography – recalling some of the original dances but also creating new ones as well.

Overall, this Singin’ in the Rain is worth seeing as long as you understand that it isn’t going to be the classic film.