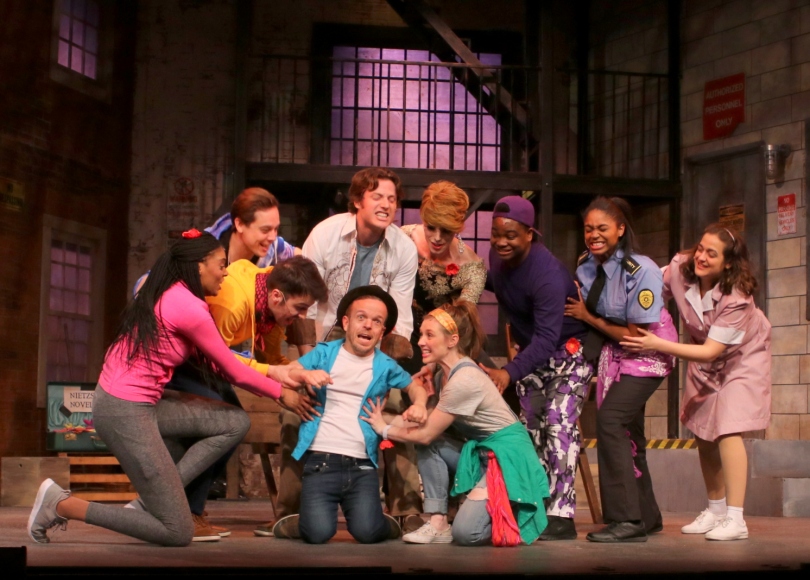 Remember the early ‘70s? The hippies, yippies and the flower children? The folk craze that was still popular? The Up with People singing group that seemed very Christian and very white?

Godspell was part of that era. Written by John-Michael Tebelak as his senior thesis at Carnegie Mellon University, it exploded off-Broadway in 1971 with music by the young Stephen Schwartz. Schwartz later went on to write the scores for Pippin and Wicked among others.

It told a variety of Biblical parables based on the Gospel of St. Matthew such as the prodigal son, Lazarus and the rich man, doubting Thomas, the casting of stones at an adulteress, and more. It ends with the betrayal by Judas and the crucifixion.

And as was the trend at the time, a group of young people acted out the parables as Jesus instructed them in the path to goodness. It was performed like street theater with the actors in clown like makeup. In reality it harked back to the early English Miracle plays.

Up-dating the show is tricky business which director Jacqueline Hubbard pulls off most of the time. Instead of a group of young street people, she has transformed them into a mixture of ages, professions and traits. So the dramatic and sexy character is transformed into a drag queen, while we have added a woman in uniform that might represent police or a security guard. Some of the characters are young and others old. What ties them together is that each, in some way, is an outsider or an “other” in current society.

But, perhaps respecting her audience, Hubbard doesn’t go too far. Jesus looks, not like an outsider, but like a clean cut preppy college student.

Hubbard was also restrained in adding in contemporary references, somewhat of tradition with the show. The opening number begins with brief, crackling radio news broadcasts about climate change, North Korea, and more. I only caught one obvious reference to President Trump and that was fleeting and mild.

The set by Martin Scott Marchitto transforms the stage into a cross between an abandoned warehouse and an alley between buildings. There’s the iron stairs, the trash cans, the boarded up door; it’s a place where outsiders might congregate. Marcus Abbott has used a variety of colors – perhaps nodding to the rainbow – to bathe the stage during different numbers.

Costume designer Cully Long has created expressive costumes, and spectacular ones for the drag queen, played by Sam Given who is drag queen Millie Grams. I do wonder why some of the cast change costumes so often.

The show starts with a fascinating song, “Tower of Babble” in which each of the cast sings bits and pieces from different philosophies. Then we move into John the Baptist (played by Carson Higgins who doubles as Judas), preparing for the arrival of Jesus. But to me the show seemed to start slow, lacking energy which was reflected by the audience’s response.

Things pick up near the end of the act with “All for the Best”. It’s a vaudeville number with Jesus and Judas singing two different melodies. It includes typical vaudeville choreography and instead of canes, Judas carries a golf club. The company joins in and it is a rousing number. I’ve always thought it should be the number just before intermission.

That number, and the audience’s hearty applause seemed to pick up everyone’s energy level.

Overall, the cast is very good; they act out the parables in the slightly exaggerated style necessary and musically most are very strong.

As Jesus, Sam Sherwood (who starred at Ivoryton last summer in Once), sounds good but the characterization is flat at times; it isn’t clear why people are drawn to him. Carson Higgins as Judas forces us to pay attention him, giving a nuanced performance.

But the star of the show, is Sam Given as the drag queen. He captures every exaggerated feminine gesture, body position and attitude so well, that your eye is constantly on him. While entertaining, it does unbalance the show.

Josh Walker is excellent and less obtrusive; his rendition of “We Beseech Thee” is excellent.

Hubbard has also made effective use of the aisle, with Jesus entering from the balcony. Again very reminiscent of street theater.  Todd Underwood’s choreography is seamless.

So perhaps the major flaw is that the show is unbalanced; tilting towards Sam Given distracting us from Jesus and Judas.

Godspell is a show that the entire family will enjoy. It runs through Sunday, June 16.

This content is courtesy of Shore Publications and zip06.com