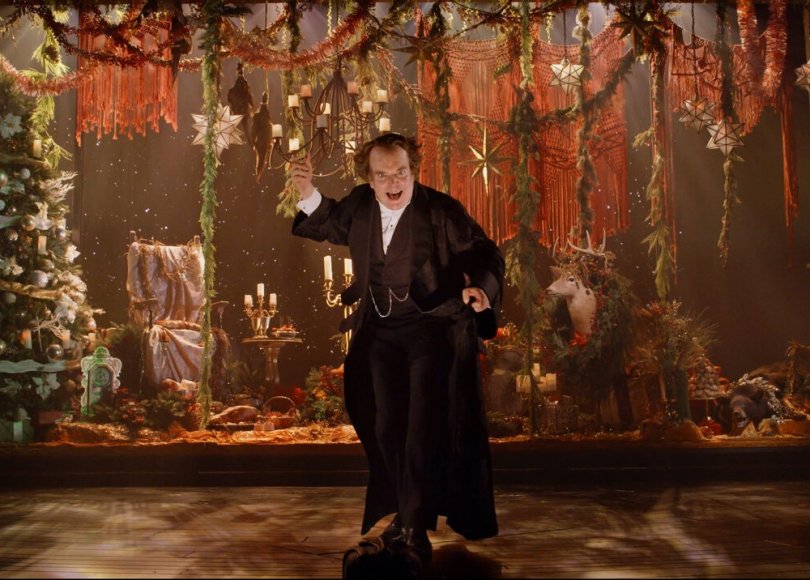 You still have time to stream three holiday productions – one is a classic, one a new adaptation of a classic and the third, a moving piece about WWI.

Playhouse on Park moved their scheduled production of this work with music from the theater itself, to outdoors, filming it at Auerfarm in Bloomfield. The show, which runs just over an hour tells the story of the British and German soldiers who during WWI met in “no man’s land” to celebrate a short Christmas truce.

It’s told with period songs and writings from the soldiers. But it doesn’t just tell the story of that brief truce; we hear the British men as they sign up and are sent overseas; full of optimism for this adventure which everyone assumes will be over by Christmas. Among the people quoted are two young British poets: Wilfred Owens (who died in the war) and Siegfried Sassoon who was highly decorated during the war.

A cast of nine perform the music, which is stunning for its close harmonies; the music itself is from the period and includes some of the soldiers’ parodies of popular songs of the time. (Anyone who is familiar with Oh, What a Lovely War! will know them). Both English and German songs and carols are included.

This isn’t a play per se, but a dramatic telling of the story. While some characters reoccur, it is really a series of songs and quotes from the writings of the soldiers. It is filled with the hope and despair; the comic and the tragic that is all part of war.

The bleak farm fields adds a realistic touch to the show. No attempt was made to make it “realistic” with period costumes, trenches or regulation appearance. That makes this piece all the more haunting.

Jefferson Mays, the Tony-award winning actor, had adapted Charles Dickens A Christmas Carol as a one-person show several years ago. The adaptation with Michael Arden and Susan Lyons is based on the version that Dickins’ himself used in his “readings” of the story on tour in the US. This year, the adaptation was filmed

Mays is known for playing multiple roles; in this production his transformations depend less on costumes and make-up and more on vocal inflections, gestures and facial expressions. He narrates the familiar story and in a moment becomes Scrooge, Marley, Scrooge’s nephew Fred and more. Even a potato. Some may say this is a darker and more true-to-Dickens version though the transformation and happy ending remains. (Even the Hartford Stage annual production which is subtitled A Ghost Story of Christmas depends on humor and a wink from Scrooge to lighten the early parts of the story.)

But this Scrooge seems colder and meaner than other portrayals; there is no happy music to jolly-up the story.

The filming allowed for a variety of special effects – some quite scary – to be included. Only once, do we see a fleeting glimpse of anyone else; this is Jefferson Mays holding us enthralled as he both narrates the story and performs it.

To stream this, go to A Christmas Carol

Estrella Scrooge: A Christmas Carol with a Twist

This clever new musical takes the familiar story and both up-dates it and adds in new elements. It is the brainchild of John Ciard and Paul Gordon. The two adapted it, wrote the music & lyrics (Gordon) and directed this production (Ciard). They are known for their work on Jane Eyre, Daddy Long Legs and other shows and Ciard directed the original Les Miz. They may not be as well-known as other composer/lyricist/libretto combos, but they are very talented.

This modern version features Estrella Scrooge, a hard-driving, ruthless Wall Street tycoon who heads Bleak House, a company that seems to specialize in buying, tearing down houses and businesses and then building high end developments with little concern for the people who are displaced. She returns to her home town of Pickwick, Ohio on Christmas Eve to foreclose on HeartHouse, a rundown hotel that takes in a variety of misfits. The man running the hotel is “Pip” Nicklesby, who was her teenage boyfriend. Of course, she meets the three ghosts.

The show is an example of combining stage and film. Each actor was filmed separately and sang “live” but it was all put together seamlessly.  The completed production runs over two hours.

The twist is that the authors have incorporated references to other Dickens’ works. I’ve already mentioned Bleak House, the name of Estella’s company. But the characters include Pip, as well as references to the Artful Dodger, Miss Havisham, Uriah Heap, the Peckniff sisters.

Some may find the mash up of plots – elements from other Dickens’ novels are incorporated, annoying, but I found it a fun approach to the traditional story.

While the music and lyrics may not rival Sondheim or Kander & Ebb, they are tuneful. I look forward to listening to the score again.

Overall the performances are excellent, the animations and special effects equally good and some delightful choreography.

This production benefits various local theaters. In Connecticut, you can purchase tickets (and therefore aid) the Legacy Theater of Branford or Seven Angels Theater in Waterburythrough Jan. 18